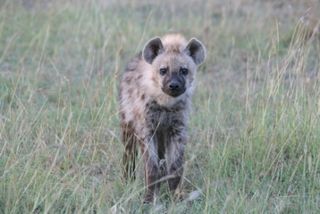 Spotted hyenas are known for their "laughs," but research shows the hyena giggles are anything but light-hearted. The animals usually make the noise during social conflicts.
(Image: © Eli M. Swanson)

Though many people compare hyenas to dogs, they are actually much more like cats. In fact, they are members of the suborder Feliformia, which is a classification for cat-like carnivores, according to Integrated Taxonomic Information System (ITIS). There are four species in the hyena family, and they vary in size.

The spotted hyena's coat is sandy, yellowish or gray, according to the Animal Diversity Web (ADW). It has dark brown or black spots over most of the body.

Brown hyenas are the second largest, ranging from 51 to 63 inches (130 to 160 cm) long and weighing 75 to 160 lbs. (34 to 72.6 kg), according to ADW. Brown hyenas can be distinguished from other hyenas by the long, shaggy hair, which is dark brown or black on the body and tan on the shoulders and neck. Hair on the neck grows to about 12 inches (30.5 cm), in contrast to the short hair on the legs, face and ears. The tail is short and bushy. The forelegs, which are horizontally striped, are much longer and more massively built than the hind legs, giving the brown hyena the appearance of always climbing a hill.

Aardwolves are the smallest species of hyena. They weigh from 17.6 to 30.8 lbs. (8 to 14 kg), and their length ranges from 33 to 41 inches (85 to 105 cm) — and about one-fourth of that is the tail, according to ADW. Aardwolves resemble striped hyenas, with similar fur texture and color.

Where hyenas live depends on their type. Brown hyenas have a very limited range and live only in Southern Africa, including the Kalahari and Namib deserts. They are usually found between the Angola-Namibia border and the Orange River in South Africa.

There are two distinct populations of aardwolves. One subspecies lives in southern Zambia, Angola and Mozambique, as well as northeastern Uganda and Somalia. The other subspecies extends into central Tanzania, Ethiopia, Sudan and Egypt.

Spotted hyenas have a little bit larger range and live south of the Sahara Desert. They occur throughout sub-Saharan Africa, and are the most numerous large predators in the Serengeti.

The striped hyena has the largest range of all. It lives in north and northeast Africa, the Middle East and Asia, all the way to southern Siberia.

Hyenas can adapt to almost any habitat and are found in grasslands, woodlands, savannas, forest edges, sub-deserts and mountains as high up as 13,000 feet (3962.4 m), according to the National Wildlife Foundation.

Hyenas are very social and live in groups called clans. Clans can have up to 80 members, according to the National Wildlife Foundation.

Not only are spotted hyena females larger, they are also more aggressive and are dominate in their clans. All females rank higher than males in the clan. However, the brown and striped hyenas and aardwolves have male-dominated clans.

Aardwolves are insectivores, and they only eat termites. Though the termites secrete a toxin, aardwolves do not seem to be affected by it, according to ADW. They consume the termites by licking them off surfaces with a flat, sticky tongue. They can consume 30,000 termites every night.

The other hyena species are carnivores, which means they only eat meat. They are known to take advantage of other animals' kills for easy meals, but they aren't just scavengers. They also hunt and fill their diet with wildebeest, antelope, hippos, birds, jackals, lizards, fish, snakes, foxes, porcupines, eggs and insects.

The size of the meal often is determined by how large the hyena's clan is. Clans work together to take down prey, so the bigger the animal, the more members the clan needs to have for a successful kill.

They often hide extra food in watering holes, since nothing is wasted. Hyenas will eat every part of an animal, including bones and hooves. [Image Gallery: Hyenas at the Kill]

Matting typically happens outside of the clan. Non-related males and females will mate after a courtship that can last several days. After a gestation of around three months, female hyenas give birth to two to four young, according to ADW. Baby hyenas are called cubs.

Mothers in a clan will share the responsibility of nursing each other's young and other members of the can may bring food to the den for the cubs.

Here is the classification of hyenas, according to ITIS:

There are currently around 10,000 mature adult hyenas in the world, according to the National Wildlife Foundation. The hyena's only predator is humans. These animals are losing roaming areas due to farming and they are commonly shot by ranchers for attacking livestock.

Even so, the brown hyena is the only one in danger of extinction, currently. The brown hyena is classified as near threatened, according to theInternational Union for Conservation of Nature (IUCN). This is because the mean global population size is estimated below 10,000 mature individuals, and it is estimated that the population may continue to decline 10 percent over the next three generations, which equals 24 years.

Spotted hyenas are known as "laughing hyenas" because they have a distinctive call that sounds like human laughter. It isn't a laugh at all, though. They make this sound when they are excited, but nervous, or when they are submitting to another hyena. Spotted hyenas also make 10 other vocalizations to communicate with their clan.

Stripped hyenas, unlike the spotted hyena, usually doesn't make any noise and communicates with body movements.

Maasai people of Kenya and Tanzania leave their dead to be consumed by hyenas instead of burying them, according to National Geographic.