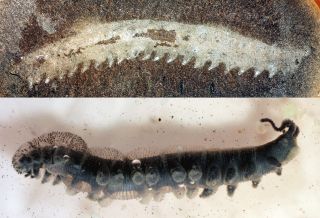 A rotten velvet worm (bottom) compared to its fossil counterpart. By watching the most primitive living vertebrates decompose, researchers can better understand 300-million-year-old fossils like this one.
(Image: © Courtesy Duncan Murdock, Sarah Gabbott, and Mark Purnell)

Note to readers: In the scratch-and-sniff version of this article, you will smell rotting hagfish, dissected worm guts and a suitcase full of slime.

Don't worry — you won't need a gas mask to read it. But you might need one to visit Sarah Gabbott's lab at the University of Leicester in England, where a team of paleontologists is rethinking the way fossils form by watching the world's most primitive vertebrates rot in real time.

By studying how worms, eels and unctuous hagfish decompose, Gabbott and her colleagues are trying to answer a much broader question: When you look at an animal fossil, how much of that animal aren't you seeing? In particular, how can scientists piece together what the world's oldest vertebrates looked like when most of their skin, organs and other soft tissue cells rotted away to nothing before fossilization could occur? [In Images: Fossilized Dinosaur Brains Found]

"Interpreting the fossils of very primitive vertebrates is extremely difficult," Gabbott, a professor of paleobiology at the University of Leicester and co-author of a new study published March 20 in the journal Palaeontology, told Live Science. "These vertebrates are preserved in stone that's about half a billion years old, and they predate the [evolution] of the skeleton. They have no teeth. They have no skeletal hard parts. So, you don't know which parts of their anatomy are missing because they just rotted away, and which bits are missing because they hadn't yet evolved."

That's where the carcasses come in.

A suitcase of slime

For their research, Gabbott and her colleagues collected specimens from around Europe — blood-sucking lampreys from a river in Yorkshire, oozing hagfish from coastal Sweden, sundry worms and insects — and watched them rot in their Leicester lab. Here, the team monitors every decomposing carcass for at least 60 days; some specimens have been rotting in the lab for nearly 10 years.

Why focus on the demise of oozing, eel-like bottom-feeders? According to Gabbott, soft-tissued creatures like lampreys and hagfish represent "the most primitive known vertebrates alive today" and look very similar to relatives that lived 300 million to 500 million years ago. By watching which types of tissues from these creatures decompose, and when, the researchers can better understand what types of tissues may be missing from the fossilized remains of ancient vertebrates.

The work has proved illuminating — and also really smelly. "Hagfish, it has to be said, stink when they rot," Gabbott said. They also ooze, even after death. While the team was transporting a suitcase full of dead hagfish back to Leicester from Sweden, the specimens produced so much slime that it broke through a plastic container and started leaking through the bag's zipper. Meanwhile, rag worms (small marine worms that fishermen use as bait) smell so nauseating as they decompose that the researchers had to wear "a special kind of gas mask" just to handle them, Gabbott said.

Fortunately, Gabbott added, these nasally challenging experiments are already producing surprising results. For starters, the order in which various tissues decayed was not as intuitive as the researchers predicted.

"We were expecting things like muscle tissues to decompose quite quickly, but they lasted a long, long time," Gabbott said. According to a previous study she co-authored in 2010, muscle tissue in rotting adult lampreys lasted more than 300 days. On the flip side, the researchers expected the cartilage that forms a lamprey's skull to decompose slowly, but in many specimens, it rotted away within just a few months.

To build a fossil

The surprising takeaway of these results, Gabbott said, is that fossils may form significantly faster than most of us imagine.

"Most people think fossils take millions of years to form," Gabbott said. "But with these animals that don't have any hard parts — no mineral, or skeleton, or teeth — everything is pretty much gone after 100 days. So, the fossilization process has to occur super quickly, before the entire body is all rotted away."

To turn soft tissue into fossil, minerals in the earth, like calcium phosphate (the same stuff your tooth enamel is made of), somehow become attracted to dying cells even as they're rotting away, forming a "mimic" of the tissue that was there, Gabbott said. The exact reasons for this remain a mystery — one that Gabbott and her colleagues hope to solve one day by creating a complete fossil from scratch in their lab.

In the meantime, there is much more work to be done with rotting bottom-feeders, Gabbott said. Luckily, you only have to buy a gas mask once.