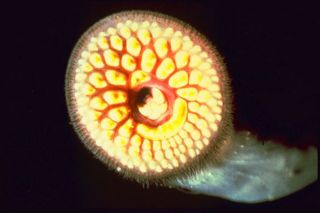 They lack jaws, eyes and bones, but lampreys and their "primitive" anatomy have survived 360 million years and four major extinctions relatively unaltered, suggests a new study.

Scientists unearthed and analyzed the oldest lamprey fossil [image] ever discovered, finding that it had a mouth nearly identical to today’s lamprey.

"This fossil changes how we look at lampreys today," said study team member Michael Coates of the University of Chicago. "They're very ancient, very primitive animals, yet with highly specialized feeding habits."

Modern lampreys attach their circular mouth suckers to unsuspecting fish. After puncturing their host’s skin, they slurp up fishy body fluids before detaching and slithering away. Hagfish move their mouth parts similar to how a book opens and closes to chow down on other fish [video].

Until now, scientists had dug up just one hagfish and three lamprey fossils, all of which were preserved sideways so that any evidence of their specialized feeding parts was hidden.

The bodies of lampreys and hagfish are also more vulnerable to decay. “They don’t have a bone in their bodies. They’re just cartilage and soft tissue, so the fossil record is appalling,” Coates told LiveScience.

The scientists, led by Robert Gess of the University of Witwatersrand in South Africa unearthed the fossil in an ancient estuary in Grahamstown, South Africa. Preserved showing its underside, the nearly complete soft-tissue fossil (Priscomyzon riniensis) is about two inches long with a circular mouth, proportionately larger than modern lampreys, surrounded by 14 teeth [image].

“They specialized early and they specialized successfully," Coates explained. "Early on they specialized and adopted an anatomical and behavioral strategy option which has served them through a subsequent 360 million years and it’s allowed them to slip through a whole series of big extinction events."

The study is detailed in the Oct. 26 issue of the journal Nature.