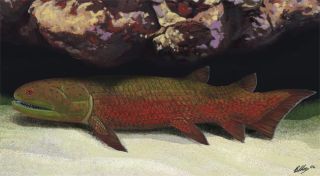 Artist interpretation of the Gogonasus fish in a tropical reef.
(Image: © Museum Victoria)

A primitive fish that swam in tropical reef systems before life clambered up on land had more advanced features than previously thought, a new study finds.

Scientists led by John Long of the Museum Victoria in Melbourne, Australia, discovered the first complete fossil of a Gogonasus fish last year in a limestone formation in Western Australia. Prior to the new discovery, only parts of Gogonasus, including a snout and part of a skull, had been found.

The newly discovered fossil "has all these remarkable details preserved that none of the other specimens could show," Long said.

The specimen, whose middle ear and limbs resemble those of land vertebrates, could be one of the missing links between fish and four-legged land vertebrates, bringing researchers closer to the point when life reached the water's edge.

The finding, detailed in the Oct. 19 issue of the journal Nature, could provide valuable clues about our fishy heritage, scientists say.

Gogonasus [image] was an ambush predator, about 12 inches long, that trolled tropical reefs during the Devonian period or the "Age of Fishes."  Once the species died out, the skeletons got buried by layers of shale in what is called the Gogo Formation.

"It's one of the few sites in the world where you can get whole complete fish in limestone," Long told LiveScience.

When the scientists unearthed the Gogo fossil, they could still open and close its mouth. "It's like it died yesterday," Long said.

With a computed tomography (CT) machine, which beams X-rays at hundreds of different angles around an object one slice at a time, the scientists created three-dimensional images of the skeleton [video].

The fish had a big hole in its head. Called a spiracle opening, the cavity leads down into the gill chamber used for breathing and is thought to be the forerunner for the middle ear in modern land animals [image].

The fossil also showed the beginnings of a wrist joint and a complete front fin, consisting of the same arm bones found in humans and four-legged animals--the humerus, radius and ulna. The scientists suspect the fish used the front limb to push off the sea bottom and lunge at prey.

"So it could've rested on those fins and then just pushed off. I think rather than walking on land it was using this to push itself out of the reef to catch prey," Long said. "The fins needed to be strong and muscular, because the thrust was coming from the front of the animal and not from the tail."

The scientists think the findings will lead to a re-shuffling of the evolutionary line-up of fish from the earliest fish to land animals, placing Gogonasus closer to tetrapods than Eusthenopteron, a fish with tetrapod features.

The Gogo fish had less-advanced front limbs than Tiktaalik, the most amphibian-like fish discovered so far.

"Gogonasus is more like an ordinary fish except its hiding very advanced features that you would not otherwise see unless you had a perfect three-dimensional specimen," Long said. "In a way, it's like a wolf in sheep's clothing."