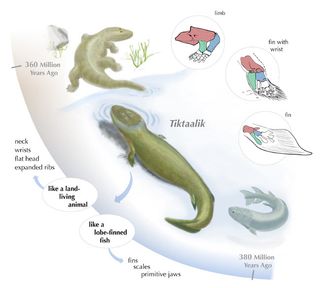 An artist's rendition of the fish-tetrapod transition.
(Image: © Kalliopi Monoyios.)

A newfound beast with swim fins and a head like a crocodile fills an evolutionary gap between fish and four-legged land animals.

The creature had gills, a fish-like jaw, and scales. But its mobile neck let it lift its head above water, and it could support its own weight on thick ribs and wrist-like bones. It may have even trudged across mudflats in the manner of four-legged animals, called tetrapods.

"I would say it's a key transitional form in the fish-to-land animal transition," said study co-author Neil Shubin of the University of Chicago. "It has features of both fish and tetrapods—we call it a ‘fishapod.'"

The animal, Tiktaalik roseae, lived about 375 million years ago, spanning the period between a fish called Panderichthys (385 million years ago) and tetrapods known as Acanthostega and Ichthyostega(365 million years ago). The team discovered several well-preserved fossil specimens ranging from 4 to 9 feet long from nose to the estimated tail.

"If you look at joints of limbs, you can tell that the thing could perform a fish version of a push-up," Shubin told LiveScience. "It could bend its elbow and flex its wrist. It was certainly capable of supporting its body underwater, in the shallows, or in mudflats with its limbs."

The somewhat awkward animal probably didn't walk, since it likely couldn't rotate its shoulders. Instead it might have dragged itself along on land.

"It could either push itself straight up and down or pull itself forward," Shubin said. "It more likely flopped around like a seal rather than walked like a horse."

The longer snout suggests Tiktaalik bit at prey like a croc, rather than sucking on it like a fish.

The fossils were discovered in layered rock in Ellesmere Island in Canada. Although the site is 600 miles north of the Arctic Circle today, 375 million years ago this land straddled the equator. The landmass had a subtropical climate and Tiktaalik likely lived in a series of shallow streams similar to the Mississippi River Delta.

"Outside, it's a classic Arctic scene," Shubin said. "But inside those rocks is a tropical world."

When a fossil like this fills a big gap, two smaller gaps are created, Shubin said, leaving the possibility that better transitional species have yet to be discovered.

The study is detailed in the April 6 issue of the journal Nature.