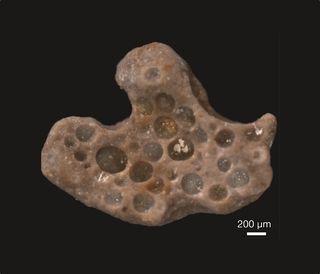 Fossilized bubbles formed by cyanobacteria some 1.6 billion years ago were found in the so-caled Vindhyan supergroup in central India.
(Image: © Stefan Bengtson)

A nondescript series of pockmarks in rock is actually the captured breath of microbes from 1.6 billion years ago.

The fossils come from fossilized mats of microbes found in central India. Most of the microbes are cyanobacteria, according to new research published Jan. 30 in the journal Geobiology. These ancient microbes, among the oldest life on Earth, were photosynthesizers — like modern plants, cyanobacteria turned sunlight into energy, exhaling oxygen as a byproduct. Their ancient exhalations oxygenated Earth's atmosphere beginning around 2.4 billion years ago, paving the way for life as we know it today.

Cyanobacteria also excreted minerals that hardened into layered mats called stromatolites. Stromatolites are found in a few places today, notably Shark Bay in Western Australia and in a remote patch of freshwater in Tasmania, but they once dominated Earth's shallow seas. Swedish Museum of Natural History biogeologist Therese Sallstedt and her colleagues studied some of these mats from a thick sedimentary layer called the Vindhyan Supergroup, which may contain fossils of some of the oldest animal life on the planet. [In Images: The Oldest Fossils on Earth]

The bubbles are tiny, just 50 to 500 microns in size (for comparison, a human hair is about 50 microns in diameter). Some of the spheres are compressed, as if the once-flexible mats were squished before they became locked in stone. The mats also contain filament structures that are probably the remains of cyanobacteria, the researchers reported.

The bubbles indicate that the mats were filled with oxygen produced by the microbes inside, the researchers wrote. These particular stromatolites contain high levels of calcium phosphate, putting them in a category known as "phosphorites." The discovery of oxygen bubbles within these phosphorites suggests that cyanobacteria and other oxygen-producing microbes may have played a larger role than researchers realized in constructing this type of microbial mat in ancient shallow oceans, Sallstedt and her colleagues wrote.