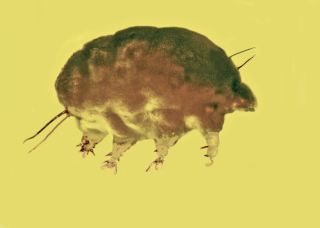 If you can't get enough of tardigrades — those tough, tubby microscopic critters with eight squirmy legs — you'll love this newly discovered microinvertebrate.

Discovered by paleobiologist and entomologist George Poinar Jr. of Oregon State University, mold pigs earned the nickname thanks to their fungi-heavy diet and vague resemblance to hogs, according to a statement released yesterday (Oct. 8). Only 0.003 inches (100 micrometers) long, the creatures boast four pairs of teensy legs, a flexible head and an exoskeleton that molts as they grow. The tiny swines' proposed scientific name, Sialomorpha dominicana, derives from words meaning "fat hog-shaped" in Greek.

"The mold pigs can't be placed in any group of currently existing invertebrates — they share characteristics with both tardigrades, sometimes referred to as water bears or moss pigs, and mites but clearly belong to neither group," Poinar said in the statement.

Poinar may be best known as the paleobiologist who inspired a major plot point in author Michael Crichton's signature novel, "Jurassic Park," according to Science Friday. Poinar and electron-microscopist Roberta Hess (Poinar's wife) discovered that organisms can be immaculately preserved in amber, the fossilized resin of ancient coniferous trees. Within the yellowish substance, an organism's cellular machinery can remain largely intact over the course of millennia.

Inspired by this finding, Crichton dreamt up a world where dinosaurs could be summoned from DNA encased in amber.

Back in reality, Poinar never stopped digging for and discovering new organisms hidden in ancient resin. Recently, he and his colleague Diane Nelson of East Tennessee State University came upon several hundred mold pig fossils coated in amber from the Dominican Republic. The specimens date back to the mid-Tertiary period, about 30 million years ago, and would have shared their habitat with pseudoscorpions, nematodes, protozoa and fungi, the authors said.

"The large number of fossils provided additional evidence of their biology, including reproductive behavior, developmental stages and food," Poinar said. The creatures mostly fed on fungi but also ate some small invertebrates, the researchers found. Although mold pigs may resemble tardigrades at first glance, they represent a previously unknown new family, genus and species of microinvertebrate, according to Poinar. He and Nelson described their discovery in a paper published Sept. 28 in the journal Invertebrate Biology.

"Based on what we know about extant and extinct microinvertebrates, S. dominicana appears to represent a new phylum," Poinar said. "But we don't know when the Sialomorpha lineage originated, how long it lasted, or whether there are descendants living today."