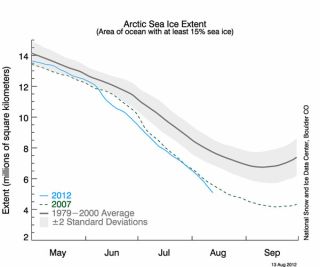 The Arctic sea ice just hit its lowest extent since measurements began in the 1970s, raising the question of when Arctic summer sea ice will disappear for good.

The answer is not yet clear, thanks to the complex variability of the sea ice from year to year. But scientists say that Arctic ice is one area where their computer models seem to underestimate the rate of melt.

"Sea-ice decline is a good example of one of those areas where the projections are too conservative, i.e. where the observed decline is decades ahead of schedule relative to the model projections," Michael Mann, a Pennsylvania State University climate scientist, told LiveScience in an email.

Unlike icebergs, which break off from glaciers, sea ice forms when ocean water freezes. The loss of the ice will likely exacerbate global warming, as ice cover reflects sunlight away from the Earth, while open ocean absorbs the sun's heat. [10 Crucial Facts About Arctic Sea Ice]

Sea ice varies quite a bit each year, said Walt Meier, a research scientist at the NSIDC. Thus, researchers expect to see an overall downward trend in ice cover, but it could bounce back somewhat next year.

"We wouldn't expect it to keep going down straight off the map, so to speak," Meier said during a press conference Thursday (Sept. 20). "We expect there to be more ups and downs."

The most extreme estimates of when Arctic summer ice could vanish peg the time in four or five years, but Meier said those predictions are "very unlikely." Much of the northernmost ice in the Arctic is old and thick, he said, and might be more resistant to melt. If so, summer ice extent could hit a plateau and not disappear for many years.

"A lot of people talk potentially in the next 20 to 30 years we may become ice-free," Meier said. "That's certainly quite plausible."

The loss of ice so far has been dramatic. In 1980, Arctic sea ice covered approximately the same area as the lower 48 U.S. states, minus Oregon and Washington. In 2012, it would barely cover half the country, with everything east of the Mississippi melted off as well as Oregon, Washington, Kansas, Nebraska and North and South Dakota.

Editor's Note: This article has been updated to add "million" to the sea-ice extent.