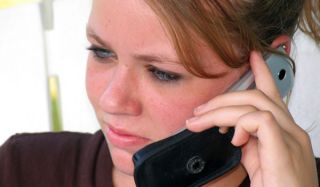 When the weather outside is frightful, we spend more time shooting the breeze with people close to us, a new study finds.

The study, published Wednesday (Oct. 10) in the journal PLoS ONE, found that during what the study authors called "uncomfortable" weather — be it hot, humid, wet or cold — people tend to have longer phone conversations, but with a smaller circle of people than usual, including close friends and family.

"We found that during uncomfortable weather, our 'ringing anyone' behavior declined, talking on the phone for longer to our close friends and family more than our wider network," co-author Santi Phithakkitnukoon, a researcher at England's Newcastle University, said in a statement.

The researchers analyzed anonymous records of 1.3 million mobile phone users in Portugal, gauging the length of phone calls and how often people called each other back. This allowed them to distinguish between "weak" and "strong" social ties.

A second study by Phithakkitnukoon and colleagues published in PLoS ONE on June 28 found that people tend to travel to places relatively close to their friends and family; about 80 percent of locations people visit are within 12 miles (20 kilometers) of these strong ties. In densely populated areas, this distance fell to just 4 miles (7 km).

It's unclear why bad weather leads to longer chats with close friends and family. Perhaps the uncomfortable weather leads to feelings of isolation, which people try to overcome by talking to those close to them, the researchers suggest. Or, they said, maybe bad weather makes real-world interaction more difficult or less desirable, leaving more time and desire to talk on the phone.