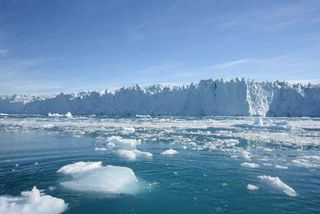 It may take less of an increase in global temperatures to melt the ice sheet covering Greenland than thought, new research suggests.

The threshold required to melt the ice completely is in the range of 1.4 to 5.8 degrees Fahrenheit (0.8 to 3.2 degrees Celsius), with a best estimate of 2.9 degrees F (1.6 degrees C) above pre-industrial levels, according to a group of European researchers.

To put these numbers in perspective, climate scientists say the Earth's surface has already warmed by more than 1.3 degrees (0.7 degrees C) since the Industrial Revolution, when humans began pumping out large amounts of greenhouse gases, particularly carbon dioxide.

The Greenland ice sheet matters because the ice it contains would substantially raise seas levels if it melted. Antarctica, too, is covered in ice and could also become a major source of sea-level rise. Warming is also expected to melt other pockets of ice around the world, such as mountain glaciers, and to raise sea levels by causing water to expand. (Warmer water takes up more space.)

According to a report in 2007 by the Intergovernmental Panel on Climate Change (IPCC) — the international body charged with assessing climate change — the Greenland ice sheet could contribute 23 feet (7 meters) to sea-level rise if it melted completely. The IPCC report relies on older estimates for temperatures needed to melt the Greenland ice sheet.

If humanity managed to limit global warming to 3.6 degrees F (2 degrees C) — a goal embraced by climate negotiators but one that looks increasingly unlikely — the Greenland ice sheet would disappear in 50,000 years, according to the study.

However, the greater the warming, the more rapid the melt; 14.4 degrees F (8 degrees C), which the researchers say equates to a "business-as-usual scenario of greenhouse gas emissions," would result in a complete loss in 2,000 years.

"This is not what one would call a rapid collapse," said lead study researcher Alexander Robinson with the Potsdam Institute for Climate Impact Research in Germany in a press release issued by the Institute. "However, compared to what has happened in our planet's history, it is fast. And we might already be approaching the critical threshold."

Robinson and colleagues used a new computer simulation to recalculate the temperature threshold. The study was published online on Sunday (March 11) in the journal Nature Climate Change.