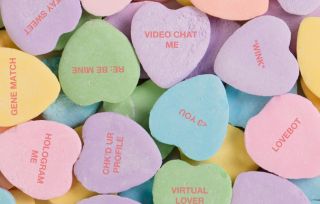 What candy heart messages do you think will show up in the future?
(Image: © Original photo by CLS Design | Shutterstock.com)

In the face of innovation, perhaps even love cannot remain unchanged.

Many relationship experts predict that technology trends now under way will drastically change how people find their significant others. These trends include more online interactions; instant, reliable worldwide communication; a culture of sharing and the loss of privacy. Here's a look at how current and future tech will: watch people's dating choices, eliminate longing and improve the prospects of the 40-plus crowd.

From love letters to sweet emails to flirtexting, human culture is moving toward ever-faster delivery of declarations of sentiment. Like the rest of the world, couples seem to prefer the newest, zippiest communication methods. "Text messaging has gone way up," said Linda Young, a relationship counselor in Bellevue, Wash., and a board member of the relationship science organization Council on Contemporary Families.

That means the delay people anticipate as normal before they get a response has gone way down. A letter writer in decades past might not see an answer for five or seven days, but a modern email-writer expects a reply in 24 to 48 hours – at the latest – and a texter wants a text back right way. People have lost what Young called "anticipatory desire."

"That's the feeling of waiting with rapt eagerness and pleasure for something you know is not going to happen really soon, but eventually, it will happen," she explained. Longing is romantic. The expectation of instant responses "degrades the signal of romance," Young said.

Improved communication can help people bond, but can also be distracting, said Stephanie Coontz, director of research at the Council on Contemporary Families in Olympia, Wash. "I see with my students an ability to share thoughts and experiences that keeps them quite close in many ways," she said, "but on the other hand, it does sometimes substitute for being fully in the moment."

Dating sites such as Match.com, OK Cupid and eHarmony are also having a huge effect on how people relate to one another. These services have "radically altered the dating landscape," according to a report by five psychologists that's slated for a future issue of the journal Psychological Science in the Public Interest. The report was published online on Feb. 2 as an uncorrected proof.

When dating websites first arose in the 1990s, most people thought that those who joined were "social failures," said Helen Fisher, a Rutgers University anthropologist and chief scientific advisor to Chemistry.com, a division of Match.com. "And now everyone's doing it because it's so easy, it's so cheap."

In 2005, a Pew Internet survey found that 11 percent of Internet-using American adults had tried dating websites, but only 2 percent of Internet users had started a long-term relationship with people they had met online. By 2010, about one in five new committed relationships started online, according to a study commissioned by Match and unpublished data cited in the Feb. 2 report.

With hundreds of thousands of members each, Match.com and its compatriots help people meet other singles they might not otherwise encounter. That has opened up opportunities for adults, especially women, who are middle-age and older. Over the last five years, relationship-oriented websites have seen their biggest growth in users age 55 and older, wrote eHarmony senior director Grant Langston. "There is a better chance for women in their 40s and older who don't want to go to bars," Coontz said. "New technology has really opened the doors for relationships, especially for older women."

Beyond exposure, however, Internet matching may not work better than any other meeting methods, the new report argued. It didn't find evidence that the sophisticated mathematical equations dating sites use to find partners for their members actually ensure compatibility.

I Googled you first

One of the benefits finding dates online does offer is that it helps take the strangeness out of meeting strangers. Before people ever contact each other, they can read each other's profiles and learn basic information they might otherwise have to gather during a first date. In general, an online culture of social media and sharing means it's much easier to research people before meeting them, by reading their Twitter feed or clicking through their Facebook photos.

Oversharing is no passing fad, most experts think. In one study conducted by the Pew Research Center of 895 Internet experts, two-thirds thought that people born after 1980 "will continue to be ambient broadcasters who disclose a great deal of personal information," even as they mature and have families.

Fisher agreed: As social media platforms grow, people will share more. "That is how the human animal operates," she said. She credited social media's addictiveness to human societies' historic states of knowing everyone's business. "For millions of years, we traveled in these little hunter-gatherer bands and everybody knew everything about everybody."

People's natural fit with this small-town mentality can make online dating feel natural as well, she argued. Before, when someone spotted an interesting potential partner, he might ask his relatives and friends about his prospect's background, kin, religious beliefs and goals in life. "Online dating mirrors that, unlike walking into a bar," Fisher said.

In the farther future, people may someday know much more about each other than what they choose to put on social media profiles. Technologies such as "social glasses" that help wearers measure others' emotions from involuntary cues like subtle paling or blushing will give people a leg up.

Of course, writers and filmmakers have long considered what it would be like to match people by their genetics. Couples that are genetically dissimilar should make up for each other's inborn faults in any children they have together. It's not clear how two people's DNA translates to attraction and healthy relationships, however. While several studies have shown that women prefer the smell of men who are genetically different from them, others show that people tend to like faces that are more genetically like them.

Current and future communication tech may expose people to more singles, but it can also make it harder to pick someone to date. Online dating services can present people with an unprecedented number of choices and it's easy to cast our nets ever wider. As Young said, "With two extra clicks, you've got a whole other pool."

Psychologists have long known that people overwhelmed with too many choices sometimes become detrimentally picky and don't make any decisions at all. "One thing these dating services all know is that the more people you think you can meet, the less likely you are to end up with any of them," Fisher said. To get around this tendency, dating sites can suggest a limited number of good matches to every user. Fisher suggested people set their own limits during the initial search phase. "After you've met nine people, pick one and get to know them more," she said. "Stop this windmill."

In fact, as Fisher tells it, there are several ways dating sites help people get around the obstructions of their own subconscious tendencies. Some sites track whom their users actually follow up with, which often doesn't correlate with the parameters they offer the site. Match.com and OK Cupid both do this tracking, as The New Yorker reported in 2011. The companies can then present their users with mate choices based not only on their stated preferences, but also reflective of their actions.

As more human activity moves online in the future, more human actions will become trackable and useable to psychologists and companies, ranging from search engines to matchmaking sites. As people click and choose during their Internet browsing, whether for mates or homework answers or the next movie to watch, they leave behind a trail of data as one huge cohort. "We have so many people to study," Fisher said.

The more things change, the more they stay the same

In spite of advancing technology, perhaps the substance of relationships will never change. Even the term "online dating" is a misnomer, Fisher said. People now meet online, but they still do their dating in person. She thinks people will always need that day-to-day contact to maintain their relationships, though not everyone may agree.

"The brain will not change because of modern technology," she said. "In the long run, no, I don't think it'll make people's relationships different."