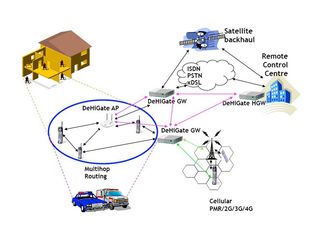 A schematic showing the flow of information in a DeHiGate network.

Losing an Internet connection or phone service can prove incredibly annoying for most people, but in an emergency, it can spell disaster.

During the September 11 attacks on the World Trade Center, frantic calls jammed cell phone networks, and firefighters, police and ambulances could not even talk to one another by radio. Since then, European researchers have tried to develop a technology that allows emergency responders to still use phone or Internet in the most chaotic situations.

Their solution: a souped-up router that allows a specially equipped command vehicle to find the best Internet access through any available wireless networks, or even satellite connections.

The emergency router is smart enough to estimate the bandwidth available on a network and decide whether it should seek out another one. The router will also serve as the center of a mobile local network for emergency responders to keep in contact with one another.

Emergency responders can boost their small local network by deploying battery-powered nodes on poles, fences or tripods. The nodes form a wireless relay backbone that widens the local network's coverage, and allows workers to stay in communication across a larger area of any given disaster scene — whether in the rubble of destroyed buildings or in a field strewn with airplane wreckage.

The system, called DeHiGate, allows emergency workers to effectively set up their own private network in a crisis, one that can’t be clogged by outside communications.

Each emergency worker would carry cell phones or other mobile equipment that allows them to talk with each other and the command vehicle, as well as transmit on-the-scene video of the disaster, said Vidar Karlsen, a manager at the Norwegian branch of the French electronics firm Thales, which is helping develop the system.

"They also have a GPS-receiver, and their position will pop up on a [digital] resource-area map in the command vehicle," Karlsen told TopTenREVIEWS.

DeHiGate underwent field tests during a two-day disaster simulation in Finland. In that case, researchers set up temporary stations that allowed firefighters to make calls, use the Internet and transmit video footage of the mock disaster to HQ.

The firefighters gave DeHiGate the thumbs up for the most part, but suggested certain tweaks such as allowing for thermal cameras that can see through fire and smoke.

Since the project's completion, different companies have continued developing DeHiGate for possible commercial or military use. Consumers probably won't see it hit store shelves anytime soon, but they shouldn't discount the technology — it could help save their life one day.