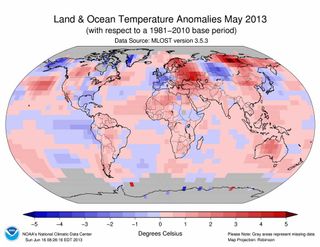 A map of blended land and sea surface temperature anomalies in May 2013.
(Image: © NOAA)

May 2013 was among the top three warmest months of May in more than 130 years, when scientists began regularly collecting temperature records, according to a new report from the National Oceanic and Atmospheric Administration (NOAA).

The monthly summary also indicated that several regions of the world experienced record warm temperatures in May, including much of Siberia, parts of northern and eastern Europe, west-central Australia, areas of Libya and Algeria in northern Africa, and parts of northeastern China. Today's report continues a global trend in warming temperatures: Earlier this year, NOAA declared 2012 the warmest year on record in the contiguous United States. May 2012 is the warmest May on record.