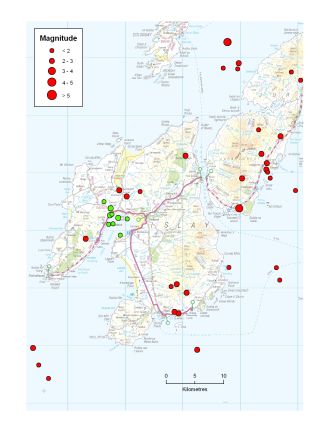 Hold on to your drinks, a swarm of earthquakes has been rattling one of Scotland's main whisky-producing regions.

Since the beginning of February, a sequence of at least nine small earthquakes has struck the island of Islay on the west coast of Scotland, according to the British Geological Survey. The largest of the earthquakes had a magnitude of 2.8 ML (the ML scale is often called the Richter scale). The two others had magnitudes in excess of 2.0 ML. Eight of the earthquakes were felt by locals who reported that "the house trembled from side to side," the "tin sheeted roof shook" and that it felt like "a very large heavy track moving vehicle."

These earthquake swarms can occur when moderate to large earthquakes are followed by aftershocks. Normally, the largest aftershock is about one magnitude unit smaller than the main shock.

Another way that quake swarms occur is when sequences of earthquakes are clustered without a clear distinction of main shock and aftershocks. Such earthquake sequences or swarms are relatively common in Great Britain.

The Islay earthquakes are relatively small, and no damage would be expected from events of this size, according to the British Geological Survey. Seismic activity in and around Islay is relatively low, although a number of magnitude 3 or greater events have occurred in recent times.

The largest-known Scottish earthquake occurred near Loch Awe in 1880, with a magnitude of 5.2 ML.