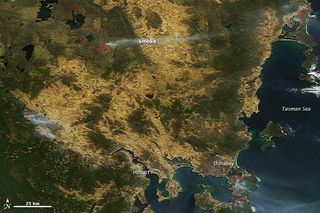 It is getting hot Down Under. And it's only going to get worse before it's over.

Australia and Tasmania, where it is currently summer, are in the midst of a horrendous heat wave. Yesterday (Jan. 7), the average temperature throughout the country broke a 40-year-old record, reaching 105 degrees Fahrenheit (40.3 degrees Celsius), according to the Guardian. One area in the country's south hit 119 F (48.3 C) this weekend, AccuWeather reports.

The forecast for next Monday (Jan. 14), with temperatures above 125 degrees Fahrenheit (52 degrees Celsius) in the state of South Australia, is so unprecedented that the Australian Bureau of Metereology had to implement a new color to its temperature map, an incandescent purple.

"What makes this event quite exceptional is how widespread and intense it's been," Aaron Coutts-Smith, the weather bureau's climate services manager, told the Guardian. "We have been breaking records across all states and territories in Australia over the course of the event so far."

The high heat, combined with a lack of rain, has created some of the worst wildfire conditions the country has seen. Today (Jan. 8) there were 130 wildfires throughout New South Wales, the country's most populous province, in southeast Australia, according to the Guardian.  About 40 fires also continued to burn out of control in Tasmania, just south of Australia, destroying some 77 square miles (200 square kilometers) and dozens of buildings,the Guardian reports.

An image taken yesterday by NASA's Terra satellite shows the smoke rising from numerous blazes occurring throughout Tasmania, as well as the red outlines where the satellite detected the high heat of the flames. More than 100 homes were destroyed and 100 people are missing, many in southeast Tasmania, according to the NASA Earth Observatory.

The New South Wales fire service issued "catastrophic" fire warnings in four areas of the province, the highest level on the scale.

"The word catastrophic is being used for good reason," said Australian Prime Minister Julia Gillard today on television, according to the AP.  "So it is very important that people keep themselves safe, that they listen to local authorities and local warnings. This is a very dangerous day."

While it's difficult to blame any single weather event on climate change and global warming, climatologists generally agree that heat waves in Australia will become more frequent and intense with the warming trend. The U.N.'s Intergovernmental Panel on Climate Change found that there is a 90 percent chance that heat waves will become more frequent and longer-lasting as a result of climate change, the Guardian noted.

"Whilst you would not put any one event down to climate change, weather doesn't work like that," the AP quoted Gillard as saying. "We do know over time that as a result of climate change we are going to see more extreme weather events and conditions," the prime minister said.