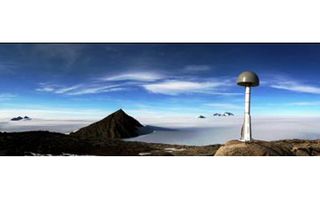 Unusually high temperatures last year caused a spike in the melting of Greenland's glaciers, which in turn caused large portions of the underlying bedrock to rise nearly a quarter of an inch.

Greenland is covered by an ice sheet thousands of feet thick that built up over millennia as layers of snow and ice formed. As Earth's temperature rises with global warming, more of Greenland's ice is melting away.

The thick layer of ice pushes down the bedrock below it, but when that ice melts, this force is reduced and the bedrock rises in response. GPS stations planted along the Greenland coast measure the bedrock's natural response to the ever-diminishing weight of ice above it.

Some GPS stations around Greenland routinely detect uplift of 0.6 inches (15 millimeters) or more, year after year.

In 2010, a temperature spike lifted the bedrock a detectably higher amount over a short five-month period — as high as 0.8 inches (20 mm) in some locations.

Michael Bevis of Ohio State University, who presented this finding last week at the American Geophysical Union annual meeting in San Francisco, said he's confident the uplift is due to anomalous ice loss during 2010.

"Really, there is no other explanation," Bevis said in a statement. "The uplift anomaly correlates with maps of the 2010 melting day anomaly. In locations where there were many extra days of melting in 2010, the uplift anomaly is highest."

In scientific parlance, a melting day "anomaly" refers to the number of extra melting days — that is, days that were warm enough to melt ice — relative to the average number of melting days per year over several decades. In 2010, the southern half of Greenland lost an extra 100 billion tons of ice under conditions that scientists consider to be anomalously warm.

Because the solid earth is elastic, Bevis and his team can use the natural flexure of the Greenland bedrock to measure the weight of the ice sheet, just like the compression of a spring in a bathroom scale measures the weight of the person standing on it.

The GPS station measurements indicate that as that ice melted away, the bedrock beneath it rose. The amount of uplift differed from station to station, depending on how close the station was to regions where ice loss was greatest.

This story was provided by OurAmazingPlanet , a sister site to LiveScience.