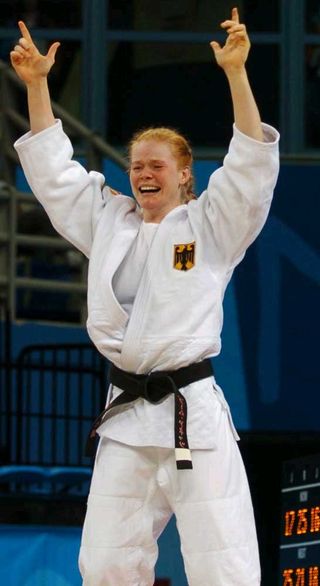 A Sighted athlete showing pride after an Olympic triumph. This response may have evolved as an survival skill.
(Image: © PNAS/Tracy & Matsumoto/Bob Willingham)

It turns out that the stereotypical image of a victor — head tilted back, chest puffed out and arms in the air — may be an innate human response to success.

A new study found that blind athletes who have never seen such a display make similar gestures of pride as sighted athletes when they win, and also slump their shoulders and narrow their chests in shame when they lose.

The findings imply that expressions of pride and shame may have evolved to be programmed into human behavior.

Researchers Jessica Tracy of the University of British Columbia in Vancouver, Canada, and David Matsumoto of San Francisco State University analyzed photographs taken during judo competitions in the 2004 Olympic and Paralympic Games. They found that physical reactions to winning and losing among sighted people, congenitally blind people (those who have been blind since birth), and people who went blind later in life were notably similar.

The scientists detail their results in the Aug. 11 issue of the journal Proceedings of the National Academy of Sciences.

In general, when blind and sighted competitors won, they would expand their bodies, and when they lost, they would pull themselves inward.

"My read was that the Westerners felt shame in those situations but they were inhibiting those responses, and I think that is supported by the blind findings," Tracy told LiveScience. "In American and other Western cultures, we're taught from a very early age not to show shame — it's stigmatized — whereas in the East it's appropriate to show shame in a major Olympic failure, for instance."

People who are blind from birth likely haven't learned to suppress their natural physical reaction to shame because they haven't seen how others from their culture react in those situations.

The researchers suggest that these universal expressions may have evolved as a form of social communication.

"With pride, the original function may have been actually, if I make myself larger that tells others, 'I'm someone to watch out for. Hey, I'm dominant, powerful, in control,'" Tracy said. "Over the course of evolution, humans would acquire the innate propensity to associate this display with success."

Expressing shame may also be a survival skill.

"There are many times where it's not that adaptive to show shame — essentially you're saying, 'I just screwed up,'" Tracy said. "But if you really feel yourself weaker than an adversary, and you could convey that, that you agree, 'You're more powerful than me, I submit to you, don’t hurt me, and we both save resources compared to if we had to fight.' My guess is that’s why it's still around."

Previous research has shown that these pride and shame gestures are widely recognized around the world in many different cultures. But this is the first study to probe whether the expressions are innate or learned — i.e. nature vs. nurture.

The discovery that congenitally blind people show the same behaviors implies that they may be part of human nature.

"Here are people who have never seen people express this," Tracy said. "The only possible explanation you could make is, well, maybe their parents physically move their bodies in this way to teach them. Given the specificity of the response — we're not just talking about a simple arm stretch, but chest expansion and shoulders pulling back and everything — to me that seems like a less parsimonious suggestion than it being innate."

The researchers now want to compare the gestures they found in humans to behaviors among other primates.

"Primatologists have found that chimps show an inflated display: When the alpha chimp is about to fight, he puffs his shoulders and walks in a cocky gate." Tracy said. "Submission displays have been documented that involve cowering, lowering of the body. That's pretty similar to hunching the shoulders and the shame display. But there's a difference between these anecdotal observations and an empirical study. No one's coded a bunch of chimps and seen what are the exact behaviors you see in these situations."