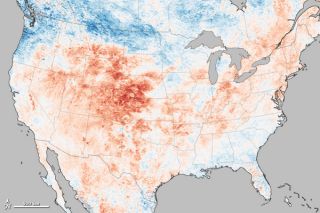 This map shows the heat wave currently sweeping across the United States with temperatures taken by a NASA satellite on June 26, 2012.
(Image: © NASA)

Suffering in the summer heat? You're not alone. In a new map made using data compiled by a NASA satellite, a heat wave can be seen spreading across the country, hitting the Great Plains particularly hard.

In the past week, 1,011 records have been broken around the country, including 251 new daily high temperature records on Tuesday (June 26), according to the Associated Press. The week before that, 77 record-high temperatures were tied or beaten. What's more, 26 states and Washington, D.C., are under some kind of heat advisory today (June 29).

The extreme heat, combined with a dry winter and spring, has helped spawn a number of wildfires raging across the West. Many states with the highest temperatures have had more blazes. Colorado experienced the brunt of the heat wave earlier this week and had eight large wildfires burning as of today. Wyoming and Utah — other states that have seen unusually hot weather — together had nine wildfires burning.

The map was made using surface temperatures nationwide from June 17-24, which were measured by NASA's Aqua satellite. These temperatures were then compared with the average over the same eight days from 2000-2011. Areas with warmer-than-average temperatures are shown in red, near-normal temperatures are white, and cooler conditions are blue.

So what's with the extreme heat? This heat wave, like all major weather events, has its direct cause in a complex set of atmospheric conditions that produce short-term weather. However, weather occurs within the broader context of the climate, and many scientists agree that global warming has made it more likely that heat waves of this magnitude will occur.

This year has been extreme in terms of heat and dryness, as was 2002 (a record-breaking year for fires in Colorado). So far, 2012's weather looks very similar to the weather of 1910. That year, spring was warm and dry, which fed into a hellish fire season. Among the blazes was the Great Fire of 1910, also known as "the Big Burn," which destroyed 3 million acres of forest in Washington, Idaho and Montana.