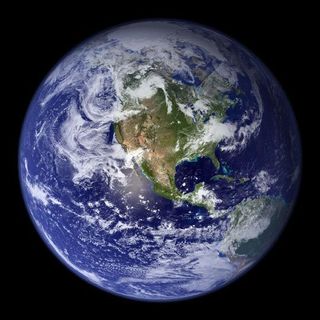 Temperatures are projected to rise by several degrees this century, but the deep oceans will periodically interrupt the increase by absorbing excess heat, a new study says.
(Image: © NASA/JPL)

The world is projected to continue warming over the century; however, the increase isn't expected to be a smooth one. Projections show that temperatures will likely stabilize for periods as long as a decade before the warming continues.

So where is that extra heat going? The deep oceans, scientists say.

"We will see global warming go through hiatus periods in the future," said Gerald Meehl, lead author of a new study that connects warming hiatuses with absorption of heat by the deep ocean and a scientist at the National Center for Atmospheric Research (NCAR) in Colorado. "However, these periods would likely last only about a decade or so, and warming would then resume. This study illustrates one reason why global temperatures do not simply rise in a straight line."

To figure out where the heat was going, Meehl and his colleagues ran five simulations on a computer model that portrays complex interactions between the atmosphere, land, oceans and sea ice.

Their results showed that temperatures would rise by several degrees during this century, but with hiatus periods interrupting the increase. During these hiatus periods, simulations showed that extra energy entered the deep oceans, absorbing a disproportionate amount of heat. [Read: Earth in the Balance: 7 Crucial Tipping Points]

They found the vast area deeper than 1,000 feet (300 meters) warmed by about 18 to 19 percent more during the hiatus periods than at other times. Meanwhile, shallower waters warmed substantially less.

"This study suggests the missing energy has indeed been buried in the ocean," said Kevin Trenberth, a study author and NCAR scientist. "The heat has not disappeared and so it cannot be ignored. It must have consequences."

Their study showed that the deep-ocean absorption of heat had a familiar effect. During a hiatus period, sea-surface temperatures decreased across the tropical Pacific, while increasing in the higher latitudes.

The study is published in the Sept. 18 issue of the journal Nature Climate Change.