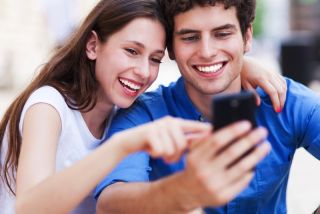 Your smartphone harbors thousands of types of bacteria, and these may provide a window into the microbes that live on your body and in your surroundings, a new study suggests.

Researchers took samples from the index fingers and thumbs of 17 people, as well samples from their smartphone touchscreens, and found more than 7,000 different types of bacteria in all the samples.

The most common bacteria types were Streptococcus, which is commonly found in people's mouths, and Staphylococcus and Corynebacterium, which are typically found on human skin.

As might be expected, the microbes on the mobile devices closely matched those on the participants fingers — among the most common bacteria in the samples, 82 percent of bacteria types on participant's fingers were also found on their phones, the researchers said.

Each person had more bacteria in common with his or her own phone than with anyone else's phone, said study researcher James Meadow, a postdoctoral researcher at the University of Oregon. [Body Bugs: 5 Surprising Facts About Your Microbiome]

"This study confirms that we share more than an emotional connection with our phones — they carry our personal microbiome," the researchers wrote in the June 24 issue of the journal PeerJ. (In this case, "personal microbiome" refers to the collection of microbes on personal items.)

Although the findings have an "ick factor," bacteria on smartphones are not necessarily something to worry about. In fact, most of the bacteria on the body and in the environment appear to be harmless, Meadow said.

"Very few of the bacteria around us are actually dangerous," Meadow said. The researchers did not specifically look at whether bacteria in the samples were pathogenic (disease-causing), but all of the participants were healthy.

The researchers also found that the smartphones in the study contained more than just bacteria found on fingers. Phones may carry bacteria that we pick up from being outside, or from touching surfaces or other people, Meadow said. These bacteria don't necessary integrate into the microbiome, and more research is needed to understand how they affect health, Meadow said.

In the future, it may be possible to use smartphones as a way to monitor the bacteria people are exposed to in the environments, Meadow said. For example, phones could be screened before or after a person enters a hospital, to see if they are bringing dangerous pathogens in or out, Meadow said.

Taking samples from actual people requires consent, and some people may find it uncomfortable, but swabbing smartphones could be a less-invasive way to get samples, he said. "This may be a way to make research into the microbiome easier in the future," Meadow said.

The study was small, and did not include mobile phones with keypads, so future studies are needed to confirm the results. It also remains to be seen whether mobile phones really do reflect the bacteria people encounter on a daily basis, and whether phones could be used for infection control, the researchers said.