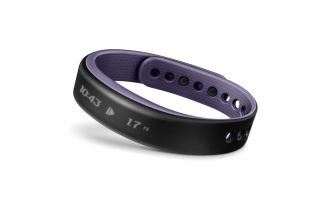 Vivosmart tracks steps taken, calories burned and notifies you of texts and calls that you receive on your smartphone. BUY the Garmin Vivosmart >>>
(Image: © Garmin)

Garmin's newest fitness tracker, the vívosmart, is an activity tracker and smartwatch rolled into one. Like most fitness trackers, vívosmart counts steps taken, calories burned and distance walked. But the device also syncs with your smartphone, so you can get notifications on your wrist about incoming calls, texts, Facebook messages and Tweets. At $169.99, vívosmart is pricier than Soleus Go, another fitness tracker that also features some smartwatch capabilities and that retails for about $60. However, vívosmart costs less than smartwatches geared toward fitness enthusiasts, such as the Samsung Gear 2, which retails for $299.

Garmin markets its new tracker as a tool that can make your daily routines more healthful. The device automatically sets individualized step goals that challenge you to increase your activity throughout the day. Vívosmart also keeps track of your downtime, giving you a gentle reminder to get up and move if you've been sitting for an hour or more. [Best Fitness Tracker Bands]

I used Garmin's vívosmart for a week to see if the device could get me moving more throughout the day. Here's what I found:

Vívosmart really did get me to think more about my daily physical activity, and motivated me to work toward a new goal every day. The device's smartphone features were also useful, allowing me to check a text or see who was calling me while I was running or walking the dog.

However, vívosmart wasn't very user-friendly, and I sometimes got frustrated when trying to tap or swipe the device's screen.

Vívosmart is worn on the wrist and comes in five different color options. However, the colorful part of the band is actually hidden underneath the device's black plastic outer layer, so no one but you will really notice if your tracker has a pink underbelly or a blue one.

Though it's part smartwatch, vívosmart is definitely built more like a fitness band than a timepiece. Since the device weighs just 0.6 ounces, it's easy to forget you're even wearing this tracker — that is, until you get a phone call or text. Even though it's small, the vívosmart's vibrating notifications are strong — designed to get your attention and spur you to action. The screen of the vívosmart is easy to read both indoors and out, and you can control the brightness of the display from the main menu.

The device comes in small and large sizes. I have a medium-size wrist and wore the small version of the tracker, which fit just fine, but I had a little trouble getting the device strapped to my wrist. I finally figured out that it was easiest to put the vívosmart on upside down and then flip it around so I could see the display screen. Once it was on my wrist, the device was very comfortable, which was good since I wore it 24 hours a day (it's water resistant, so I kept it on in the shower and the pool).

Interacting with the device was another story. In order to start tracking your stats, you're supposed to double-tap the screen. This sounds simple enough, but I found it often took at least a few tries before I got the screen to light up. I had a similar problem when I swiped my finger across the screen to see my stats (such as steps taken, or calories burned). It was frustrating that I had to keep repeating my actions to make the device do what I wanted.

Vívosmart comes with a very small instruction manual, which led me to believe that setting up the device would mostly be self-explanatory. But that wasn't the case. Unlike with other trackers I've reviewed, such as Moov, setting up the vívosmart wasn't intuitive. The device syncs with your smartphone via Bluetooth, but I had to try a few times before I got the tracker to pair with my iPhone. I also had to re-pair the device after a few days because it had stopped syncing with my phone.

There are a few apps you can use with vívosmart, including Garmin Connect Mobile and MyFitnessPal, which lets you record information about your meals and workouts. Garmin Connect is supposed to sync with your device automatically after the tracker is paired, but I had to pair my device twice before the app started syncing data automatically.

Once I was all synced up, however, the app worked seamlessly, getting updated info from the fitness tracker periodically throughout the day. The data is displayed in an easy-to-read format on your phone, showing you how many steps you've taken and calories you've burned, and how many more you have to go to meet your goals.

However, I didn't understand the calories section of this app. My tracker faithfully showed me, on my wristband, how many calories I had burned throughout the day, but I couldn't get that data to appear in the app on my phone. Instead, the Garmin mobile app directed me to the MyFitnessPal app, where I was prompted to enter highly detailed information about my meals. At this point, I just gave up, since I wasn't sure of the serving size of the omelet I had eaten for breakfast. But if you're really interested in tracking calories, and will take time to enter detailed info, the app seems well-equipped to help you.

Vívosmart does a great job of tracking steps taken and can also be used to track calories, sleep and distance walked. Unfortunately, once this data is collected, neither the device nor the Garmin Connect app give many hints on how to use the information. I'm not sure how my step goal was calculated every day, or how many steps per day is ideal by Garmin's standards. The device also tracked my movement while I slept— including total time slept and light versus deep sleep — but I wasn't sure what to do with this data either

The smartwatch features of the vivosmart were useful; when I was running, I could just leave my phone in my pocket and read texts right on my wrist. However, there's no way to respond to texts or answer calls with the device, so I still had to take my phone out of my pocket to text or call someone back.

Vívosmart tracks how long you remain inactive and then buzzes you on the wrist to tell you to get moving. While I wasn't surprised to learn that I spend a lot of time sitting (I'm a writer, after all), it was good for me to see just how long I can go without walking around. The device's move bar automatically buzzed me after an hour of downtime, and I found that those buzzes were very helpful.

Like most fitness trackers I've brought into the pool, the vivosmart does an OK job of registering activity in the water. I used the device while swimming laps, jogging in the shallow end, doing kickboard exercises and treading water. It registered some of my movements and recorded them as steps.

The vivosmart also lets you keep track of how much time you've spent in the pool. However, to do this, you have to press the activity-recording button on the tracker before you jump in the water. I found it almost impossible to manipulate the device's display screen once it was wet.

I liked using vívosmart even though I wasn't always sure what to do with the information it tracked. The device got me to think more about my everyday physical activity. And the "move bar" feature was really good at getting me on my feet every hour or so.

While I'm not a competitive person, I found I really like competing against myself — pushing myself to complete my step goal every day and cover a bit more ground than I had the day before. If I were a competitive person, I probably would have enjoyed Garmin Connect's community feature, which lets users interact with one another and compare stats. You can also see how your physical accomplishments measure up to those of professional athletes.

Another really enjoyable feature of the vívosmart is its super-impressive battery life. I wore the device every day for a week and only had to charge it once.