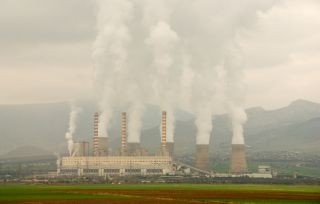 According to the EPA, the production of electricity is the source of about one-third of U.S. greenhouse gas emissions.
(Image: © Palis Michalis | Shutterstock)

The latest report from the Intergovernmental Panel on Climate Change (IPCC) cements the urgency for U.S. leaders to move boldly and quickly on climate change, and the most logical place to start is the nation's fleet of power plants.

Recently, when the U.S. Environmental Protection Agency (EPA) announced a proposal to limit carbon pollution from new power plants, groups involved with climate change cheered the announcement. Cleaning up power plants is an essential first step to addressing climate change and its effects, from superstorms to catastrophic fire seasons. Power plants are by far the biggest carbon polluters in the country, accounting for 40 percent of U.S. carbon dioxide emissions. There is no excuse for building any new, dirty plants without carbon pollution controls.

The Clean Air Act requires the EPA to rein in carbon pollution that is already changing our lives and racking up enormous costs. In 2007, the Supreme Court ruled in the landmark decision, Massachusetts v. EPA, that greenhouse gases are pollutants covered by the Clean Air Act, and that the EPA must regulate them if they endanger public health and welfare. Not surprisingly, when the EPA examined the data now available (after decades of research by hundreds of the world's leading scientists and the leading U.S. government and global scientific research agencies), it reached the inevitable conclusion that carbon pollution does, in fact, endanger public health and welfare.

Now, the EPA is taking the next step to control pollution from new power plants. It's a required step under the Clean Air Act, and absolutely the right move to protect the climate. At this point, EPA's job is to set strong standards for pollution control based on what the best performers in the industry can achieve.

The rule that the EPA proposed last week would require any new coal-fired power plants to employ carbon capture and sequestration technology (CCS) to achieve a standard of no more than 1,100 pounds of carbon dioxide per megawatt hour. That would be a major improvement relative to what the existing coal fleet emits, although with CCS, utilities can afford to do better.

At least half of the gas plants in operation today would meet a limit of 825 to 850 pounds of carbon dioxide per megawatt hour. That is true of nearly all plants built since 2006, which means that anyone building a new plant today can choose to meet limits much lower than the EPA's new, proposed standard. In other words, U.S. gas power plants today already are beating the new proposed standard. Missing out on achievable emission reductions is a lost opportunity the nation can't afford. The EPA needs to finalize a lower gas standard to comply with the Clean Air Act, and more fundamentally, make all the progress it possibly can to reduce carbon pollution in the face of a climate crisis.

The same goes for coal plants. Final standards should reflect the full extent of emission reductions that coal plants can achieve with CCS. Right now, the question of what requirements should apply to new coal plants is largely academic, because utilities — with just a few exceptions (see below) — are not proposing to build them. One can expect that trend to continue as long as natural gas prices remain low, which is why getting the standard right for new gas plants is so important. But that doesn't mean the coal industry won't fiercely oppose any standard at all, much less one that will prevent another rush to build dirty coal plants if and when gas prices rise.

So far, it looks as if the coal lobby is making headway on getting a few key concessions from the EPA. As the agency acknowledges, there still are a handful of live proposals to build new coal plants — the Sunflower plant in Kansas (see here for more on this controversial plant and the battle around it), Wolverine in Michigan, and Plant Washington in Georgia — and their developers currently have no plans to control their carbon pollution.

Building these new plants without CCS is exactly what the EPA's new rule should prevent. Instead, the agency is proposing to exempt all three plants from compliance with the new standards. This would be precisely the wrong start when it comes to building a cleaner energy future.