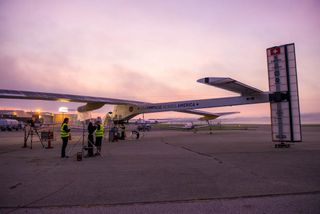 The Solar Impulse plane is pictured on the runway shortly before taking off from Cincinnati, Ohio on June 15, 2013.
(Image: © Jean Revillard/Solar Impulse/Polaris)

A solar-powered plane will fly from Washington, D.C., to New York City tomorrow (July 6), on the fifth and final leg of its unprecedented trip across the United States.

Solar Impulse is the first plane capable of flying day and night without using any fuel. The aircraft is powered entirely by solar panels and batteries, and continuously stores energy as it flies. The ultra-lightweight plane generates about the same amount of power as a small scooter, company officials have said. [Images: Cross-Country Flight in a Solar-Powered Plane]

This weekend's flight will take Solar Impulse over the Chesapeake Bay, which surrounds Virginia and Maryland, as it travels up the Atlantic Coast. As the plane approaches the "Empire State," it will fly over the Verrazano Bridge, which connects the New York City boroughs of Staten Island and Brooklyn, and the Statue of Liberty.

Company officials said Saturday's flight has been confirmed, but flight directors will continue to monitor weather conditions and may decide to modify the route or postpone the departure if necessary.

Solar Impulse's historic coast-to-coast journey began two months ago when the plane took off from Moffett Airfield near San Francisco, Calif., on May 3. Since then, the aircraft has stopped in Phoenix, Dallas, St. Louis, Cincinnati and Washington, D.C.

Swiss pilots and Solar Impulse co-founders, André Borschberg and Bertrand Piccard, have alternated piloting the single-seater plane on its cross-country trip. Borschberg is expected to be at the controls when the plane departs the nation's capital, company officials said.

The carbon fiber aircraft weighs about the same as a station wagon, and its solar panel-covered wings are roughly the same length as a 747 jetliner. The plane's cross-country expedition is part of an initiative called "Clean Generation," which is designed to demonstrate the potential of clean technologies.

Several events are planned to celebrate Solar Impulse's historic cross-country journey, including a Google Hangout that will be conducted live during this weekend's flight. Erik Lindbergh, the grandson of famed aviator Charles Lindbergh, is scheduled to participate in the online chat session, company officials said.

Next week, Borschberg and Piccard will participate in a NASDAQ Opening Bell Ceremony in Times Square and meet with UN Secretary General Ban-Ki Moon.