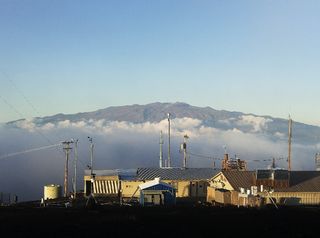 The proportion of carbon dioxide in the atmosphere is set to break 400 parts per million this month, levels not seen in 3 million years, according to one of the best climate records available.

The Keeling Curve, a daily record of atmospheric carbon dioxide, has been running continuously since March 1958, when a carbon dioxide monitor was installed at Mauna Loa volcano in Hawaii. On its first day, the observatory measured a carbon dioxide concentration of 313 parts per million (ppm). That number means there were 313 molecules of carbon dioxide in the air for every 1 million air molecules.

The number continued to climb through May 1958 and then slowly started to drop, reaching a minimum in October that year. This maximum-minimum pattern, repeated seasonally, reveals how trees withdraw carbon dioxide from the air in summer to grow and then release it through dead, decaying leaves and wood in the winter.

But humans release carbon dioxide into the air, too, by burning fossil fuels. This activity has caused the Keeling Curve to creep ever upward since 1958: The lows get a little higher each year, as do the highs. [The Reality of Climate Change: 10 Myths Busted]

Because carbon dioxide typically peaks in May, researchers are expecting the Keeling Curve to break a milestone of 400 ppm this year. (If not, the number will almost certainly be reached in May 2014.) As of May 1 of this year, the last day data was available, the Mauna Loa observatory recorded 399.39 ppm of carbon dioxide in the air.

There will be no huge atmospheric or climatic shift once carbon dioxide hits 400 ppm, but the milestone has symbolic significance, said Michael Mann, a climate scientist at Pennsylvania State University.

"It is a reminder of just how uncontrolled this dangerous experiment we're playing with the planet really is," Mann told LiveScience.

In the 1,000 years that occurred before the Industrial Revolution of the 18th century, atmospheric carbon dioxide held steady at around 270 to 280 parts per million.

Scientists believe that the most recent period to reach 400 ppm was the Pliocene Epoch, between 5 million and 3 million years ago, according to the Scripps Institution of Oceanography, which keeps track of the Keeling Curve.

A major difference between then and now, though, is the speed at which carbon dioxide is rising today. Typically, in the last 40 to 50 years, the Keeling Curve shows increases of 2 to 2.5 ppm a year, Mann said. In the 1950s and 1960s, carbon dioxide increased by less than 1 ppm each year, according to Scripps.

"We're on course for more than 450 ppm in a matter of decades if we don't get our fossil fuel emissions under control quite soon," Mann said.