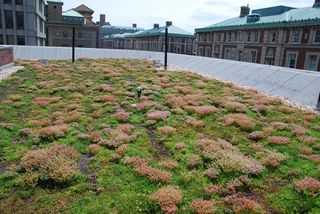 Paul Rauber is a senior editor at Sierra. He is the author, with Carl Pope, of "Strategic Ignorance: Why the Bush Administration Is Recklessly Destroying a Century of Environmental Progress." This Op-Ed was adapted from an article on Sierra. He contributed this article to Live Science's Expert Voices: Op-Ed & Insights.

I live in densely populated Berkeley, Calif., while my sister lives on a farm near bucolic Bowie, Md. Which one of us is greener? Thanks to a team of researchers from the University of California at Berkeley (score one for the hometown team already!), we can now find out.

For a paper in Environmental Science and Technology, Christopher Jones and Daniel Kammen combined census data, transportation figures, and 35 other variables to come up with an interactive carbon footprint map for 31,000 zip codes in 50 states. It shows the average annual household carbon footprint in Berkeley to be 35.1 tons of carbon dioxide equivalent; Bowie — sorry, sis! — clocks in at 68.9.

The biggest portion of Bowie's bigfoot is transportation — nearly a third of the total. The same goes for Berkeley, but apparently our public transportation options are better, or at least better used. In fact, I can see that the average Berkeleyite in my zip code travels 1,292 vehicle miles per month (at a cost of $173). For their part, Bowieites travel 2,715 vehicle miles per month, for $225.

That points us at the study's key finding: Even though less than half of the U.S. population lives in the suburbs, suburbs account for half of all U.S. greenhouse-gas emissions. "Unfortunately," Jones says, "while the most populous metropolitan areas tend to have the lowest carbon footprint centers, they also tend to have the most extensive high-carbon footprint suburbs."

Play around with the site and see how your community measures up. Demographics, of course, isn't destiny: You can improve your score in the future by searching out clean energy solutions.

This Op-Ed was adapted from the article "Greener Than Thou"on Sierra. Follow Rauber on Twitter @paulrauber. The views expressed are those of the author and do not necessarily reflect the views of the publisher. This version of the article was originally published on Live Science.