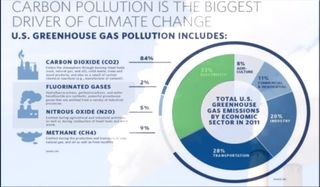 David Doniger is the policy director for the Climate and Clean Air Program at the Natural Resources Defense Council (NRDC). He contributed this article to LiveScience's Expert Voices: Op-Ed & Insights.

The U.S. Environmental Protection Agency (EPA) has kicked off an ambitious drive to engage states, industry, the public health and environmental community, labor and others in the nuts and bolts of developing standards to cut carbon pollution from the nation's electric power plants.

The president's plan calls for cutting total U.S. carbon pollution 17 percent by 2020 from 2005 levels. We're partway there already, but it will take more to reach this target.

Along with other important actions, the president's plan sets specific deadlines for EPA to use the Clean Air Act to cut the 2.2 billion tons of carbon dioxide (CO2) pollution coming from existing power plants each year.

NRDC strongly supports the president's climate plan and his focus on power plants, and we're glad to see EPA moving forward. Last year, NRDC started the ball rolling with an innovative plan to cut the power sector's CO2 emissions by more than a quarter by 2020, compared to 2005 levels. Our plan would bring climate protection and public-health benefits worth $26 billion to $60 billion in 2020, at a reasonable cost of $4 billion. Now, the EPA public-engagement process will draw out more proposals and draw in more stakeholders, and the process will pick up speed.

The EPA video presents an excellent overview of a little-known, but potent, part of the Clean Air Act, called Section 111(d), that gives EPA and the states specific roles in setting and enforcing carbon-pollution standards for the nation's more than 1,500 coal- and natural-gas-burning power plants. Referring to EPA's 2009 endangerment finding, the video reminds us why carbon pollution is so dangerous, causing rising global temperatures and sea levels, increased risks of storm surge and flooding and changing weather patterns that impact habitats and ecosystems.

As the video states, those changes threaten America's health and welfare for current and future generations.

America's most vulnerable citizens — including children, older adults, people with heart and lung disease and people living in poverty — may be most at risk from the health impacts of climate change.

The federal emissions guidelines are binding on states and set the goals states must meet when developing standards of performance for existing energy sources. States will have until June 2016 to adopt state plans that apply enforceable performance standards consistent with the guidelines to each of the carbon-emitting power plants within their borders.

But here's where the video gets especially interesting. In the video, EPA states, "We believe the unique characteristics of carbon pollution and the interconnected nature of the electric power sector call for a broad and flexible approach to designing the program for existing power plants.The President has told us to consider the full range of possibilities as we develop approaches that could accommodate market-based instruments, performance standards and other regulatory flexibilities."

EPA's video webinar then summarizes the range of approaches stakeholders are already discussing, offering some useful, common definitions such as source- and system-based approaches, as well as supply-side and demand-side options. Below is an excerpt:

To help everyone build a common understanding of the range of opportunities for emission reductions, we want to take a moment to define some of these concepts. First, the ideas of a "source-based approach" and a "system-based approach."

A source-based approach evaluates emission reduction measures that could be taken directly at the affected sources – in this case – the power plants.

A system-based approach evaluates a broader portfolio of measures including those that could be taken beyond the affected sources but still reduce emissions at the source.

And you may know your own state has many of these programs already in place. Demand-side options address actions that reduce electricity usage by reducing demand and improving the efficiency of energy-using devices. This could include such things as improving insulation and reducing energy losses, reducing wasteful energy use, and replacement of old or inefficient appliances in favor of high efficiency appliances.

This is an excellent description of the range of measures that NRDC believes EPA should consider when determining the 111(d) performance standards that should apply in each state and be available to power generators for compliance. In fact, it's an excellent description of the system-based approach in NRDC's power plant proposal. As we've shown, we can cut power plant carbon pollution by more than a quarter, with huge climate and health benefits and modest costs.

There are many steps ahead to be sure that such standards are strong enough. Meeting President Obama's 17-percent national carbon-reduction target for 2020 is going to require power plants — the largest polluters and among the cheapest to control — to make considerably more than a 25 percent carbon reduction from 2005 levels.

Fortunately, they are a good way down from that starting point already, and NRDC's plan shows the rest is well in reach. Millions of people have raised their voices to call for curbs on power plants' carbon pollution and to support the president's climate action plan, and NRDC is intent on strengthening that effort.