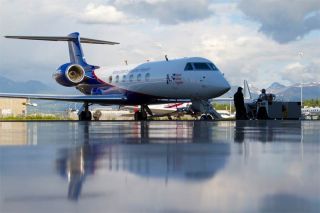 A detailed map of the global distribution of greenhouse gases, based on readings from five pole-to-pole research flights over three years, is painting an unprecedented portrait of our warming atmosphere.

Some of the preliminary findings of the "HIPPO" project were announced Wednesday (Sept. 7), two days before the scheduled return of the last of the research flights. The findings included an unexpectedly wide distribution of black carbon particles, specks that can affect climate in various ways.

Nearly month-long trips aboard a Gulfstream V aircraft equipped with various instruments have brought researchers from Colorado to Alaska and the Arctic Circle, then south over the Pacific to New Zealand and near Antarctica. Along the way, the onboard instruments have measured more than 80 gases and particles in the atmosphere.

The scientists in the HIPPO project have collected air samples at different latitudes during various seasons from altitudes ranging from 500 feet (150 meters) above Earth's surface up to 45,000 feet (13,750 m), into the lower stratosphere. [Infographic: Earth's Atmosphere Top to Bottom]

"Tracking carbon dioxide and other gases with only surface measurements has been like snorkeling with a really foggy mask. Finally, HIPPO is giving us a clear view of what's really out there," said study researcher Britton Stephens, a scientist with the National Center for Atmospheric Research (NCAR) in Boulder.

The team has found that black carbon particles, which are emitted by diesel engines, industrial processes and fires, are more widely distributed in the atmosphere than thought. These particles can absorb the sun's radiation, affect cloud formation and, when deposited on ice or snow, magnifying the rate of melt.

"What we didn't anticipate were the very high levels of black carbon we observed in plumes of air sweeping over the central Pacific toward the U.S. West Coast," said HIPPO team member Ryan Spackman, a scientist at the National Oceanic and Atmospheric Administration. "Levels were comparable with those measured in megacities such as Houston or Los Angeles."

Researchers also found higher-than-expected levels of nitrous oxide way up in the tropical atmosphere. Nitrous oxide gas traps heat and contributes to the thinning of the ozone layer, the researchers said.

The project is called HIPPO for "HIAPER Pole-to-Pole Observations." HIAPER is an acronym for the research jet, a "high-performance, instrumented airborne platform for environmental research" owned by the National Science Foundation and operated by NCAR in Boulder, Colo.

The first HIPPO mission began in January 2009, followed by two in 2010 and two this year. The final mission ends with the return of the aircraft from the Arctic to Anchorage and then to its home base at NCAR's Research Aviation Facility near Boulder.