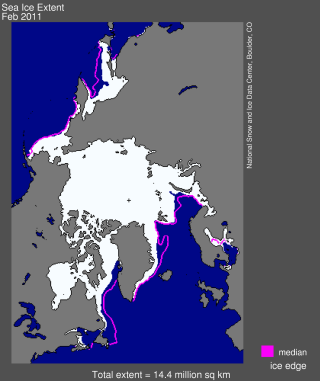 The Arctic sea ice's summer disappearing act may get all the attention, but winter sea ice is disappearing too.

This year, the sea ice cover during February tied the all-time low for the month, due in part to the same climate pattern that brought cold air unusually far south this winter in the United States. (The same pattern could bring severe weather this spring.)

February 2011 tied February 2005 for the lowest ice extent on satellite record during the month of February, according to the U.S. National Snow and Ice Data Center (NSIDC).

Who let the cold air out?

Through most of January, a natural climate pattern called the Arctic Oscillation was generally in a strongly negative phase, which means it allowed frigid air to creep unusually far south. This led to very warm temperatures over the eastern Arctic and therefore to less ice over the Labrador Sea and Gulf of Saint Lawrence.

However, toward the end of January, the Arctic Oscillation returned to a positive phase, and ice began to grow in the Labrador Sea and Gulf of St. Lawrence.

Despite tying the record in February, sea ice extent has declined less in winter months than in summer months over the past few decades. But more ice is disappearing with each winter. Including 2011, February sea ice has declined by about

During February 2011, sea ice covered 5.54 million square miles (14.36 million square km) on average. The coverage was below normal in both the Atlantic and Pacific regions, particularly in the Labrador Sea and the Gulf of St. Lawrence.