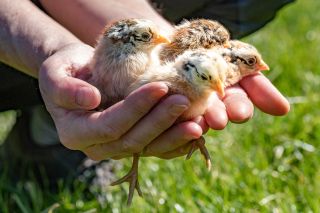 A person holding baby chickens in their hands. Many animals, including birds, can carry diseases that can jump to humans. So, make sure to wash your hands with soap after handling even the most adorable animals.
(Image: © Shutterstock)

Zoonotic diseases, also called zoonoses, are illnesses caused by germs that are passed between animals and people.

"Put simply, a zoonotic disease is one that originates in animals and can cause disease in humans," said Barbara Han, a disease ecologist at the Cary Institute of Ecosystem Studies in New York.

Zoonotic diseases are prevalent throughout the world; they can be caused by viruses, bacteria, parasites or fungi, and may cause mild or severe illness or death. Experts estimate that about 60% of known infectious diseases in people can be spread by animals, and 3 out of every 4 new diseases in people originated in animals, according to the Centers for Disease Control and Prevention (CDC).

How are zoonotic diseases transmitted?

Direct contact with animals is the easiest way for diseases to spread from animals to humans, such as through petting, handling or getting bitten or scratched by an animal. People who work in the livestock industry or in animal care industries (zoos or aquariums, for instance) are more susceptible to exposure to zoonotic diseases because they're often in direct contact with animals. Domestic pets can also be a direct source of exposure, as can wild animals that come in contact with hunters.

Spending time in areas where animals live can lead to indirect exposure to zoonotic disease agents through contact with water or surfaces that infected animals have also come in contact with. Some zoonotic germs can even contaminate the air we breathe. Hantaviruses, for instance, are a family of viruses spread by rodents, but rarely through direct contact. Instead, the viruses are more often spread in aerosolized bits of the rodent's infected fecal matter, Han told Live Science. For example, people sweeping out their sheds after a long period of time may inhale dust contaminated with infected fecal particles from mice, she said.

Zoonotic diseases can also be transferred from animals to humans through insects that act as a "middle-man," or vectors for the disease-causing agent. Ticks, for example, transfer bloodborne pathogens, such as the bacteria that causes Lyme disease, from an infected animal to other animals and humans, according to the Global Lyme Alliance. Mosquitoes and fleas are also common vectors for zoonotic diseases, such as the Zika virus (transmitted by mosquitoes) and the bacterium that causes plague (transmitted by fleas).

In May 2019, the CDC released a report made in collaboration with the U.S. Department of Agriculture (USDA) and the Department of the Interior, outlining the eight zoonotic diseases of most concern in the U.S. They came up with the following list:

Zoonotic influenza is a flu caused by viruses that originate in animals, or type A influenza viruses. Out of the four types of influenza viruses, type A viruses cause the most severe disease, and are found in ducks, chickens, pigs, whales, horses, seals and cats, according to the CDC. Only type A flu viruses are known to cause flu pandemics, or global epidemics of the flu. Both type A and type B influenza viruses can cause seasonal flu epidemics but type B viruses circulate only in humans. Type C flu viruses rarely cause severe illness, while type D mainly infects cattle and isn't known to infect humans.

Salmonellosis is an illness caused by an infection with Salmonella bacteria from contaminated food products. Contamination typically happens after an animal's infected feces comes into contact with crops or water, and people then consume or touch those items before washing their hands. Salmonellosis is one of the most common bacterial infections in the U.S., but the vast majority of infected people recover from their symptoms within two to seven days without treatment.

The West Nile virus and the bacterium that causes plague are both transmitted by insect vectors. Mosquitoes carry West Nile virus from an infected animal (most often a bird) to a person, and fleas carry the Yersinia pestis plague-causing bacterium from rodents to humans. Less than 1% of people infected with West Nile virus develop serious symptoms, and antibiotics are highly effective for treating plague.

Coronaviruses are a large family of viruses that infect birds and mammals. These types of viruses have been responsible for several outbreaks around the world, including the severe acute respiratory syndrome (SARS) pandemic of 2002-2003 and the current COVID-19 pandemic. There are seven coronaviruses known to infect humans but not all of them jumped directly from their original host to humans. Precursors to the SARS virus have been found in bats, but the virus hopped to civets (small, nocturnal mammals) before it infected humans. The SARS-CoV-2 virus, which causes COVID-19, also may have originated in bats but its still unclear how the virus spilled over to humans.

Rabies is a viral disease that affects many mammals, including humans. In the U.S., rabies is mostly found in bats, raccoons, skunks and foxes, according to the CDC, but unvaccinated domestic dogs can carry and transmit the virus, too. The virus is spread through the bite or scratch of a rabid animal. The disease causes brain inflammation and will result in death if not treated before symptoms begin.

Brucellosis, or Mediterranean fever, is a disease caused by various species of Brucella bacteria that are most often found in hoofed livestock, such as cattle, sheep, pigs and goats, although domestic dogs can also carry the disease causing bacteria, according to the CDC. A person can become infected with the bacteria by consuming undercooked meat or unpasteurized dairy products, or by handling infected animals. Death from brucellosis is rare, but symptoms may last for weeks to several months.

Lyme disease is the most common vector-borne disease in the U.S., according to the CDC. The disease is caused by species of Borrelia bacteria that are transmitted by two species of blacklegged ticks (also called deer ticks): Ixodes scapularis and Ixodes pacificus. The ticks aren't born with the bacteria, but they pick it up when they feed on an infected animal, such as a mouse or deer.

Why are zoonotic diseases a growing concern?

One of the most simple reasons could be that people are invading animal habitats more often, which facilitates more interactions between humans and animals, Han said. "When we carve into forests for logging or encroach on habitats … you set up scenarios where you contact wildlife on a more frequent basis."

Related: Images: Deforestation around the world

Certain cultural practices may also be contributing to more zoonotic diseases. For example, many people in the U.S. practice hunting and "in a lot of places in the world, that is the main source of protein," Han said. Putting pressure on the environment through hunting and development throws the ecosystem off balance, she said, and makes it harder for animals to survive as they were. The animals are forced to travel farther and search harder for food or mates, and in this chronically stressed condition, those animals are more susceptible to disease and more likely to spread disease to humans, Han said. Such hunting practices also provide more opportunities for people to become exposed to zoonotic diseases.

Another potential reason why zoonotic diseases are on the rise is that people are more connected to one another now than ever before, providing more opportunities for zoonotic disease to spread far from wherever it originated. "Connectedness is a huge deal," Han said. "Even places that are relatively remote are more connected now than they ever have been in the past."

"The idea that animals can carry these viruses and have coevolved with them over periods of time, and then those things can spill over to humans, is easy for people to be scared by," Han said. "It can have an outsized impact, psychologically, on our fear of the natural environment and our attitude toward wildlife," but the relative risk of a new zoonotic disease appearing is actually quite low, she said.

Moreover, there are clear steps individuals and scientists can take to minimize the risk of exposure and impacts of zoonotic diseases.

At the individual level, good hygiene is the best place to start. The CDC recommends to always wash your hands with soap and clean water after spending time around animals or in areas where animals live, even if you haven't touched the animals. When it comes to your pets, vaccinate your dogs and cats, clean up after them thoroughly, and avoid snuggling pet reptiles or birds as these animals are more likely to spread germs.

In terms of scientific research on zoonotic disease prevention, "I think there is a lot that can be done," Han said. In general, scientists need to work on figuring out ways for humans to sustainably coexist with our wild neighbors, she said. This means learning more about the animals in the environment — things like what animals live there, where are they going, what are they eating and what are they doing, she said.

"If you don't know what's in your backyard, then you don't know what they carry that can be harmful to you," Han said. A more thorough understanding of the ecosystem can help scientists come up with better ways to predict and prevent zoonotic diseases from popping up. "We can get a lot of mileage out of investing in basic research," she said.