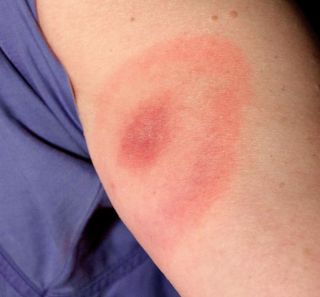 A patient shows a bull's-eye rash characteristic of Lyme disease. Typical symptoms of Lyme disease include fever, headache, fatigue, and this type of skin rash, called erythema migrans. If left untreated, infection can spread to joints, the heart and the nervous system.
(Image: © CDC)

When the deer ticks that carry the bacteria that cause Lyme disease chomp down on a person's skin and spread the bacteria, the result is a debilitating and hard-to-treat infection.

But Lyme disease isn't the only infection spread by ticks. These tiny critters carry a relatively large number of bacteria, viruses and parasites, which leads to a nagging question: Why don’t the ticks themselves get sick?

Now, in an attempt to find an answer, scientists have discovered that ticks fight off invading pathogens in a unique way.

The tick’s immune system, it turns out, works differently from that of other bloodsucking creatures that are notorious for transmitting disease-causing microbes to humans, such as mosquitoes and flies, according to the new findings, which were published Feb. 14 in the journal Nature Communications.

"We were trying to find out why ticks are capable of acquiring so many pathogens. It is very unusual, if you think about arthropods in general," said senior author Joao Pedra, an associate professor of microbiology and immunology at the University of Maryland School of Medicine.

Any given mosquito, for example, can typically transmit only one or two pathogens, Pedra told Live Science. But in addition to the Lyme disease bacteria, deer ticks are capable of transmitting six human pathogens. "So, we thought, there may be something fundamentally different about the tick immune system," Pedra said.

And there are other reasons to suspect that ticks have an immune system that's different from what is found in mosquitoes and other insects: In evolution, ticks parted ways with insects long ago — the two groups are as similar to each other as humans are to fish, Pedra noted. [27 Devastating Infectious Diseases]

The tick's way of tackling bacteria

Although the immune system of insects is well-studied, ticks have been a closed book.

In the new study, Dana Shaw, a researcher in Pedra's lab, looked at the genomes of four types of arachnids — ticks, scorpions, spiders and mites — and compared them to the genomes of insects.

There was a clear pattern: None of the arachnids had the classic kind of immune system seen in insects like flies and mosquitoes, the researchers found. In fact, ticks were missing several genes that are known to be crucial in the immune response of mosquitoes.

The team then used a technique called RNA interference that's designed to shut down specific genes and tinker with the activation of the immune system in ticks. They found that when the immune system was suppressed, the ticks harbored more bacteria. When it was overactivated, there were fewer bacteria.

These findings "showed the pathway was functional even though it was missing major components," Pedra said.

Another discovery was that, like mosquitoes, ticks have sugar-detecting proteins that sense the sugary cell membranes of invading bacteria in order to alert the ticks' immune system, according to the study. In mosquitoes, these proteins play an essential role in activating the immune system, but in ticks they seem to do nothing. [10 Important Ways to Avoid Summer Tick Bites]

Further investigation revealed that the tick immune system may be indifferent to sugar, but it responds to fat. More specifically, it recognizes two fat molecules called POPG and PODAG, which are found on the cell membrane of Lyme disease bacteria. In other words, recognizing these fats may be how ticks find the bacteria in their bodies and keep them at bay.

Now that scientists have more insight into the tick immune system, they can start thinking about ways to reduce the impact of Lyme disease, Pedra said. Among all diseases transmitted by bugs in the United States, Lyme disease is the most common, resulting in about 30,000 reported cases in 2015, according to the Centers for Disease Control and Prevention.

In theory, it may someday be possible to get rid of the bacteria that cause Lyme disease by using a gene-editing technique such as CRISPR-CAS to boost the immune system of the tick.

"Then, you'd have a clean tick that wouldn't transmit the disease," Pedra said. "But we are still many years away from this."