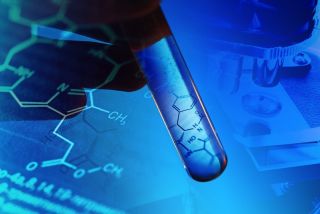 In a milestone study, researchers demonstrated the safety of a new treatment that disrupts the body's ability to make a specific protein, which may ultimately help treat patients who have the rare, often incurable and fatal disease amyloidosis.

The treatment involves a type of RNA, a molecule involved in translating the body's DNA code into proteins. Researchers produced a specific molecule that targeted the piece of RNA responsible for creating a protein called transthyretin.

In people with transthyretin amyloidosis, transthyretin folds improperly, clumps together in plaques called amyloids, and then impairs nerves and the heart.

"We are developing a tool to suppress the abnormal protein that causes the disease [transthyretin amyloidosis], and we expect in the near future to have a new and potent drug to treat our patients," said lead researcher Dr. Teresa Coelho, of the Hospital de Santo Antonio in Porto, Portugal.

The study is being published today (Aug. 28) in the New England Journal of Medicine.

There are several types of amyloidosis — they vary by the protein affected, and by which organs are impacted. Transthyretin amyloidosis is an inherited, single-gene disorder, and is far more common in Portugal than elsewhere. One in 538 people in northern Portugal have the condition, while in the United States, the rate is thought to be between 1 in 100,000 and 1 in 1 million, according to the National Institutes of Health.

Transthyretin is produced in the liver, and the only available treatment for transthyretin amyloidosis in the United States is a liver transplant, which many patients are not candidates for because of their age or health at the time of diagnosis.

The condition is otherwise incurable, and patients typically die five to 15 years after diagnosis.

With the new treatment, called ALN-TTR02, the RNA interference prevents assembly of the faulty protein."We have no evidence that transthyretin … is essential for life," Coelho said. Thus, a drug that suppresses its production seems the perfect tool to prevent the deadly consequences of amyloidosis, she said.

In the trial, 32 amyloidosis patients who took the drug saw a roughly 70 to 80 percent reduction in their transthyretin levels. It's unclear what the long-term results may be, including whether people taking the drug will live longer.

To better understand the drug's effects, the researchers also gave it to 17 healthy people, and found they experienced no side effects. [7 Bizarre Drug Side Effects]

"It's an impressive number, but who knows, with amyloid, how much is sufficient to at least slow the progression of the disease," said Dr. Morie Gertz, a hematologist at the Mayo Clinic. "It's an important proof of principle; I don't know that it will turn out to be a clinical breakthrough for patients."

How to halt amyloidosis

Coelho told LiveScience that plans are underway for a Phase III trial, the final step of drug testing before approval. However, there are still a number of roadblocks, and researchers stressed that although the new drug would be a welcome one, much more research is needed.

Dr. Raymond L. Comenzo, director of the blood bank and stem cell processing laboratory at Tufts Medical Center, said that while the trial did show some efficacy for the drug, it may be difficult for Alnylam, the company that makes the drug, to win approval from the Food and Drug Administration because a test for survival would take up much of the time when the drug would be patented.

As a result, Alnylam Pharmaceuticals, which provided funding for the study, may get the drug approved elsewhere, and bring it the United States later.

Comenzo, who along with Gertz is part of the medical advisory board for the Amyloidosis Foundation, added that the new study uses one of three methods being studied to halt the progression of amyloidosis.

In another approach, the drugs work to stabilize the proteins and keep them from forming amyloids. One drug that works in this manner, called Tafamidis, is used in Europe, but was not approved by the FDA. The third technique involves attempting to dissolve the amyloids that have formed, Comenzo said.

He said the cooperation of the community of amyloidosis in drug trials has been instrumental in research, and he is hopeful but guarded about the new treatment.

"It's a very exciting, but very early development, and one that I think has a great deal of promise for patients withtransthyretin-related amyloidosis," Comenzo said.