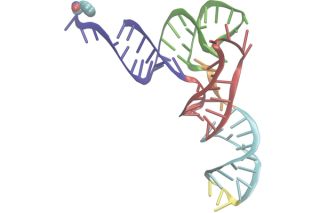 A tRNA molecule showing the region that reads the mRNA (yellow) and the amino acid phenylalanine (blue and red spheres) that the tRNA carries.
(Image: © Patrick O’Donoghue and Dieter Soll, Yale University.)

RNA is best known as a messenger that carries genetic information, but this versatile molecule is involved in many other essential cellular functions, as well. Here’s a quick rundown of the types of RNA that scientists are discovering and learning more about with funding from the National Institutes of Health.

These RNAs are involved in the fundamental process of translation, when the information in our genes is decoded and used to produce proteins.

Messenger RNA, or mRNA, transfers information held in genes to the ribosome, where cellular proteins are made. Each of our cells carries tens of thousands of different mRNAs, which give rise to a broad array of proteins.

Ribosomal RNA, or rRNA, is a part of the ribosome that plays a direct role in linking protein building blocks called amino acids. Humans have four kinds of rRNAs.

Transfer RNA, or tRNA, decodes the genetic information held in the mRNA and helps add amino acids to a growing protein chain. Scientists estimate that human cells have more than 500 different tRNAs.

Despite their small size, these RNAs have a huge impact on controlling the patterns of gene activity in our cells.

Small interfering RNA, or siRNA, is a piece of RNA that the cell snips from an invading virus or other threat and then uses to seek out and destroy the potentially deadly intruder. Because of their ability to target and inactivate specific segments of RNA, siRNAs have also become a powerful research tool for learning more about how genes function.

MicroRNA, or miRNA, is a tiny piece of cellular RNA that regulates protein production by binding to mRNA and blocking its ability to function. Scientists have uncovered hundreds of miRNAs in humans, and they estimate that miRNAs regulate more than half of our protein-coding genes.

Piwi-interacting RNA, or piRNA, is largely restricted to egg and sperm cells, unlike siRNA and miRNA, which function in many cell types. piRNAs help ensure the integrity of the important pool of DNA that gets transmitted to future generations by blocking roving genetic elements that can jump into genes and cause mutations.

Long intervening noncoding RNA, or lincRNA, appears to function as a scaffold for coordinating the activities of proteins that regulate gene activities. More than 8,000 lincRNAs are encoded in human DNA.

Many RNA molecules need to be cut, pasted, trimmed or chemically modified before they can function. These RNAs are involved in processing other types of RNA, including many of the ones mentioned above, into their final forms.

Small nuclear RNA, or snRNA, teams up with a host of proteins to form the spliceosome, a complex that snips out extraneous segments of mRNA to make a fully functional molecule that can then code for a protein. Humans have five snRNAs, each with its own role in the process.

Small nucleolar RNA, or snoRNA, identifies the rRNA targets for the addition of a chemical group or for rearrangement. The modifications produce a functional rRNA molecule that works in the ribosome.

M1 RNA helps clip tRNAs in bacteria so that these molecules can decode genetic information. Its discovery made it a “celebrity” in the RNA world because it was the first time researchers had found evidence that RNA could act as a catalyst that controls and directs cellular functions. The scientist who made this discovery, Sidney Altman, won a Nobel Prize in 1989 along with Thomas Cech, who independently uncovered evidence for catalytic activity in RNA when he discovered a self-splicing RNA molecule.

Research on these and other RNAs has led scientists to a broader understanding of RNA’s critical role in many important cellular processes and of how impairments in these processes can lead to disease. Scientists are also harnessing RNA as a research tool and as the basis for new therapies for infections, cancer and other conditions.