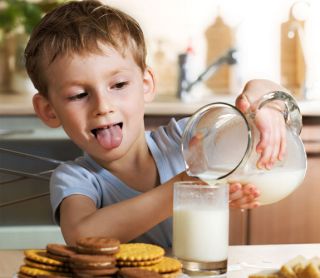 Consumers can't tell if raw milk is safe to drink by looking at, smelling, or tasting it, according to the CDC.
(Image: © Larisa Lofitskaya | Shutterstock)

People allergic to whey may be able to drink newly engineered milk without the unpleasant digestive consequences, according to research released today (Oct. 1).

A team of New Zealand researchers genetically engineered a cow named Daisy to produce milk free of β-lactoglobulin protein that can cause allergic skin, digestive and respiratory reactions predominantly in infants.

"Since the protein is not produced in human milk, it's not surprising that this protein may be recognized as a foreign protein in infants and cause allergies," study author and scientist at AgResearch in New Zealand Stefan Wagner told LiveScience.

Studies show that about 1 in 12 infants develops an allergic response to whey, but most infants are able to outgrow their allergy.

For decades, food manufacturers have broken up whey protein, a mix of about 10 proteins including β-lactoglobulin, in milk products through a process called hydrolysis in an effort to decrease its allergenicity. [9 Weirdest Allergies]

"Infant formula uses hydrolyzed milk, which is supposed to be much less allergenic, but there is still residual risk to exposure of allergies," Wagner said.

Some outside researchers expressed concern because while the milk produced by Daisy does show much less β-lactoglobulin, it held more of a non-whey protein called casein, which is also responsible for allergies. "We wouldn't think that this has any relevance to milk allergy; whey protein is one of many, many proteins that people can be allergic to," said Robert Wood, allergy and immunology chief at The Johns Hopkins Hospital, who was not involved in the new research.

So instead of relying on manufacturing methods, the researchers focused on getting the source material free of whey.

To decrease whey in milk directly, the New Zealand group created a cow free of β-lactoglobulin. To do so, they combined two tools: Nuclear transfer, a technique established during the days of cloning the famous Dolly sheep; and RNA interference, a technique relatively new for livestock used to shut down genes.

The researchers inserted a DNA fragment into cow somatic cell lines, or those not inherited, for cow-lactating tissues; this DNA element shuts down production of β-lactoglobulin in lactating tissues. Researchers then transferred the transgenic nuclei into unfertilized egg cells that, when stimulated, became embryos that were implanted into cows — a total of 57 cloned cow embryos. [Genetics by the Numbers: 10 Tantalizing Tales]

The process resulted in five pregnancies — one of which was terminated to collect cells. Of the four remaining pregnancies, one resulted in offspring.

The whey-reduced milk is years away from market, if it ever makes it to grocery shelves.

"We are nowhere near any clinical tests — what we are currently doing is to show that milk from our transgenic cow is indeed less allergenic," Wagner said.

A ways to go

But why go to all the bother of producing a transgenic cow when manufacturers can reduce whey in postproduction?

"When we process milk with heat or enzymes, we lose some of the nutrients that are essential to our body," Anower Jabed, who completed his doctoral work on the transgenic cow and is currently at the University of Aukland, told LiveScience. "It is a way to solve the problem where we don't have to process every time."

Daisy was born unable to produce the major allergen in whey, but also born four weeks prematurely, and, to the surprise of researchers, without a tail.

"We do have evidence that suggests that the lacking tail is due to an epigenetic defect (that affects gene expression rather than the genes themselves), and we believe it is not related to the genetic modification of the calf, but this must be backed up by more results," Wagner said.

The whey-reduced milk still contained other allergenic proteins and even increased casein, the main protein that coagulates to form cheese.

However, getting cows to produce hypoallergenic milk may be far-fetched, according to some researchers.

"While it's an interesting idea, that's not going to eliminate the allergies," said Hugh Sampson, an immunologist at Mount Sinai School of Medicine, who was not involved in the current study.

Because federal law says transgenic milk can't be consumed, the researchers aren't sure what it tastes like yet.

Jabed hopes that isn't the case in the future.

"When I started this project in 2007, it was my dream to see a hypoallergenic cow, I wish in the future we can produce (hypoallergenic) milk and market it and see it in store shelves," he said.

The journal the Proceedings of the National Academy of Science published the research today.