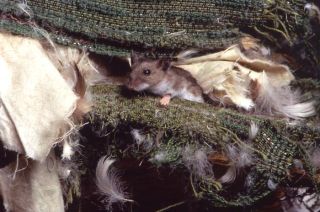 A deer mouse makes its home among deteriorating sheets of fabric and feathers. In the United States, deer mice spread the hantavirus to humans.
(Image: © CDC)

In the autumn of 2012, a mysterious illness killed three people who had recently spent time in Yosemite National Park in California. The culprit was a hantavirus, a pathogen spread through the feces and urine of rodents. The campers were exposed to the virus inside of Yosemite's insulated cabins, where infected mice had sheltered during the winter.

Though rare, the hantavirus contracted by campers in Yosemite causes a severe respiratory infection, called hantavirus pulmonary syndrome (HPS), which can be deadly. In the United States, HPS has a fatality rate of 50 percent and has infected over 600 people since it was first identified in 1993. Deer mice, which inhabit much of the United States, spread hantavirus to humans, but many different species of rodent are responsible for the spread of hantaviruses in other regions of the world.

Hantaviruses belong to the bunyavirus family of viruses. Other viruses in this family are spread by arthropods, like insects and arachnids. Some examples include the tick-borne Crimean-Congo hemorrhagic fever virus and the mosquito-borne Rift Valley fever virus, both of which most commonly infect people and livestock in Africa. But unlike these arthropod-borne viruses, hantaviruses are spread by rodents, such as mice and rats.

People can become infected with a hantavirus when they come into direct contact with the bodily fluids (i.e. saliva, feces or urine) of an infected rodent. Hantaviruses can become airborne, or aerosolized in tiny particles, and can then be inhaled, according to the World Health Organization (WHO).

Hantavirus was first identified in the United States in 1993, when a mysterious disease killed several healthy, young people in the Four Corners region of the Southwest. Victims of the disease experienced flu-like symptoms and eventual respiratory infection. An epidemiological investigation confirmed that the cause of the infection was a hantavirus, which would eventually come to be known as the Sin Nombre virus. Of the 24 patients initially diagnosed with this virus, 12 died.

"In the same year [1993] there was a case of a related hantavirus identified in a Florida man — the Black Creek Canal virus, and another in a Louisiana man, the Bayou virus. And then [another] in a New York man — the New York virus," said Dr. Robert Leggiadro, a New York physician and professor of biology at Villanova University in Pennsylvania.

These other hantaviruses were spread to people via the cotton rat, the rice rat and the white-footed mouse, respectively, Leggiadro told Live Science.

More recently, cases of HPS have been documented in Argentina, Brazil, Canada, Chile, Paraguay, and Uruguay, where the illness is caused by different strains of hantavirus, spread to people by several distinct species of rodents, according to the Centers for Disease Control (CDC).

People who contract a hantavirus in the United States may develop symptoms of hantavirus pulmonary syndrome. These symptoms usually develop between one and five weeks after exposure to fresh urine, droppings or saliva of infected rodents.

According to the CDC, about half of those who develop HPS have the following early symptoms:

Four to 10 days after the early onset of the illness, other symptoms may develop. These include shortness of breath and difficulty breathing. During this phase of the illness, the lungs begin to fill with liquid, which can eventually result in death.

While the hantaviruses spread by rodents in the United States cause a respiratory infection, those spread by rodents in other parts of the world cause a different kind of illness. In Asia, Europe and some parts of Central and South America, hantaviruses can cause hemorrhagic fever with renal syndrome (HFRS). Initial symptoms of this illness may be similar to those of HPS, but may also include blurred vision and inflammation or redness or the face, eyes or other parts of the body, according to the CDC. Later symptoms of HFRS include low blood pressure, hemorrhaging and kidney failure.

The illnesses caused by hantaviruses can be fatal and those who develop symptoms of these illnesses after being exposed to rodent droppings or saliva should seek immediate medical attention, according to the CDC.

In the United States, outbreaks of HPS are rare and usually occur in areas where forests, fields or farms provide a habitat for a hantavirus' rodent hosts, according to the CDC. Those most at risk of contracting the disease are people who regularly spend time in places inhabited by wild rodents. This includes adventure travellers, backpackers, campers and those with occupational exposure to rodents (e.g. construction workers, building inspectors, demolition workers and loggers), according to the WHO.

Hikers, campers and others seeking outdoor recreation should avoid sleeping or resting on bare ground, according to Leggiadro. Tarps, tents or elevated platforms can be used while camping, he added.

Also at risk are those who have a rodent infestation in their home. Such infestations are common in many areas of the United States, especially as the weather grows colder, according to the CDC. Because hantaviruses can become aerosolized, it's important to take certain precautions when cleaning up after a rodent infestation. Excrement and nesting materials should not be vacuumed or swept but should be sprayed with a disinfecting bleach solution and then picked up with a paper towel. In-depth instructions for cleaning and disinfecting rodent infested areas are available from the CDC.

To limit your risk of exposure to hantaviruses, you can take precautions to keep your home rodent-free. Seal holes where rodents may enter your home. Trap any rodents that have already found their way inside, and keep food protected from contamination. More information on preventing rodent infestations is also available from the CDC.

In the United States, hantaviruses have only been known to spread to humans from infected rodents. While cases of human-to-human transmission of a hantavirus have been reported in South America, such transmission has never been recorded in North America.

There are no known treatments or vaccines for HPS. When a person develops the disease, they may seek supportive treatment, which may include intubation (the insertion of breathing tube into the trachea) and oxygen therapy, according to Leggiadro.

HPS patients who are diagnosed early on and receive the proper supportive care may have a better change of surviving the illness, according to the CDC.

While no vaccine exists for the hantaviruses, research is ongoing to develop a vaccine using inactivated strains of these viruses, according to researchers with the Rega Institute for Medical Research in Belgium. Some trials of these vaccines have proven to be effective in mice but have not yet been used in humans.

This information is not meant to provide specific medical advice. It is for educational purposes only. We recommend you consult a qualified health care professional for diagnoses and treatment advice, and call 9-1-1 in emergencies.