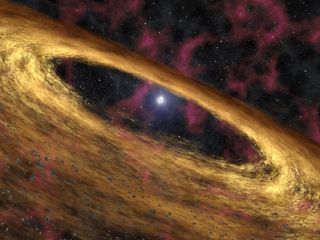 Pulsars (like the one in this artist's rendering) are the small, dense corpses of once-giant stars. It's normal for a pulsar to spin dozens of times per second — but, sometimes, they may "glitch out," suddenly gaining and losing speed out of nowhere. A new study offers an explanation why.
(Image: © NASA)

When your computer glitches, the screen might freeze up for a few seconds before rapidly skipping ahead to correct itself. When a neutron star glitches, much the same thing happens — except, in this case, the screen is a swirling magnetic field 3 trillion times the size of Earth's.

Neutron stars — dense, quick-spinning corpses of once-giant stars that pack about 1.5 times the mass of the sun into a ball with a diameter about as long as Manhattan — are always baffling. But the roughly 5% of neutron stars that are known to "glitch," or suddenly spin faster for no apparent reason before slowing to their normal speed, are especially odd.

What causes some neutron stars to reliably glitch out for a few seconds every few years, while others seemingly never fall out of step? Scientists have come up with a dozen different models to try and answer this question but are still light-years away from a consensus. Now, a paper published yesterday (Aug. 12) in the journal Nature Astronomy reanalyzes a 2016 star glitch to provide a fresh perspective on the phenomenon — and the new approach involves soup (more on that in a minute).

Related: 101 Astronomy Images That Will Blow Your Mind

For the paper, the researchers looked at a nearby neutron star called the Vela pulsar, which twirls about 1,000 light-years from Earth and normally spins about 11 times per second. (A pulsar is a neutron star that spins so fast that, when observed with radio telescopes from Earth, its magnetic field seems to pulse like a strobe light.) Vela, a dense, dead star, is known for reliably glitching every three years or so, and it was caught speeding up most recently in 2016.

By closely analyzing that 2016 glitch, the researchers discovered that Vela's spin changed in three distinct phases. First, the spin slowed down considerably for a few seconds; then, it exponentially sped up for about 12 seconds before finally slowing back to its normal pace a minute later.

The study authors said these distinct phases suggest that neutron stars have three internal components that contribute to a glitch: a rigid crust of ions connected in a lattice pattern, a roiling "soup" of freely floating neutrons forming the star's fluid inner crust, and a hyper-dense core made of protons, neutrons and possibly more exotic particles. (Nobody really knows what's at the center of a neutron star yet.)

Normally, the researchers wrote, all three layers of the star should spin independently of each other and at different speeds — however, during a glitch, it’s likely that the different components grip onto each other in unusual ways. According to one model, it starts when that soupy middle layer of neutrons couples with the slower-moving crust, transferring its momentum outward and causing the star to pulse faster. Soon, however, the dense fluid at the star’s core latches onto the middle layer, slowing everything down again.

This explanation fits Vela’s glitchy behavior, the authors wrote. However, the star’s initial slowdown phase is another story. According to lead study author Greg Ashton, an assistant lecturer at Monash University in Melbourne, Australia, Vela's 2016 slowdown is "the first time [this phenomenon] has ever been seen" in a glitching star.

"We actually have no idea why this is," Ashton said in a statement.

This preliminary slowdown could be a type of triggering event that leads to all neutron star glitches; however, with no other data to support that hypothesis right now, the slowdown could just as easily be a one-off anomaly. You could even call the discovery a glitch … but let's not over-complicate things.