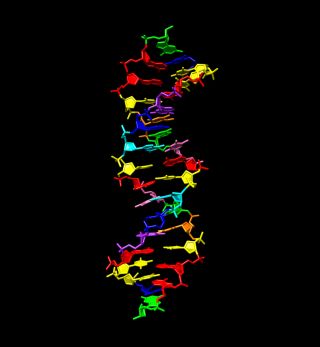 Researchers developed a new type of DNA in the lab that is made up of eight letters, rather than the natural four.
(Image: © Millie Georgiadis, Indiana University School of Medicine)

A couple billion years ago, four molecules danced into the elegant double-helix structure of DNA, which provides the codes for life on our planet. But were these four players really fundamental to the appearance of life — or could others have also given rise to our genetic code?

A new study, published today (Feb. 20) in the journal Science, supports the latter proposition: Scientists have recently molded a new kind of DNA into its elegant double-helix structure and found it had properties that could support life.

But if natural DNA is a short story, this synthetic DNA is a Tolstoy novel.

The researchers crafted the synthetic DNA using four additional molecules, so that the resulting product had a code made up from eight letters rather than four. With the increase in letters, this DNA had, a much greater capacity to store information. Scientists called the new DNA "hachimoji" — meaning "eight letters" in Japanese — expanding on the previous work from different groups that had created similar DNA using six letters. [Genetics by the Numbers: 10 Tantalizing Tales]

Natural DNA is composed of four molecules, called nitrogenous bases, that pair up with each other to form the code for life on Earth: A binds with T; G binds with C. The Hachimoji DNA includes these four natural bases, plus four more synthetically-made nucleotide bases: P, B, Z and S.

The research group, which included several different teams across the U.S., created hundreds of these Hachimoji double helixes with different combinations of the natural and synthetic nucleotide base pairs. Then, they conducted a series of experiments to see if the various double helixes had properties needed to support life.

Natural DNA has a hallmark property that no other genetic molecule seems to have: It's stable and predictable. That means that researchers can calculate exactly how it will behave in certain temperatures and environments, including when it will degrade.

But it turns out that the researchers were also able to do this with the Hachimoji DNA — they could come up with a set of rules that can predict the DNA's stability when it is exposed to different temperatures.

The finding that it's possible to add the four synthetic bases and still get a "code that's predictable and programmable ... that's just unprecedented," said Floyd Romesberg, a chemistry professor at Scripps Research in California, who was not a part of the study but who previously published research on an earlier six-letter code. This "landmark paper" suggests indeed that G, C, A and T "are not unique," Romesberg told Live Science.

Senior author Steven Benner, a distinguished fellow at the Foundation for Applied Molecular Evolution in Florida, agreed. If somewhere else in the universe, life is also coded in DNA, it's not going to be "exactly like what we have here on Earth," Benner told Live Science. "It's very useful to have these kinds of experiments in the laboratory to understand what alternative structures [might exist]."

But creating DNA that stores information isn't enough, Benner noted. It also has to have the ability to transfer that information to its sister molecule RNA, so that that RNA can then instruct proteins to carry out all the business in an organism.

With that in mind, the researchers developed synthetic enzymes — proteins that facilitate a reaction — that successfully copied Hachimoji DNA into Hachimoji RNA. Furthermore, they found that the RNA molecule was able to fold into a sort of L shape that would be necessary for it to further transfer information.

In addition, the DNA strands must be able to twist into the same three-dimensional structure — the famed double-helix.

The team created three crystal structures of Hachimoji DNA, each with different sequences of the eight base pairs, and found that indeed, each formed the classic double helix.

Still, in order for the Hachimoji DNA to support life, there's a fifth requirement, Benner said. That is, it needs to be self-sustaining or have the ability to survive on its own. However, the researchers stopped short of investigating this step, in order to prevent the molecule from becoming a biohazard that could one day work its way into the genomes of organisms on Earth.

Aside from glimpsing alternatives for life in the cosmos, this eight-letter DNA strand also has applications here on our planet. An eight-letter genetic alphabet will store more information and bind to certain targets more specifically, Benner said. For example, Hachimoji DNA might be used to bind to liver cancer cells or anthrax toxins, or be used to speed up chemical reactions.

"By increasing the number of letters from six to eight, the diversity of DNA sequences is greatly increased," Ichiro Hirao, a synthetic molecular biologist at the Institute of Bioengineering and Nanotechnology, A*STAR in Singapore who was also not part of the study, said in an email. (Hirao's team was also involved, however, in previous research that created six-letter DNA strands)

Of course, "this is just a first demonstration" of an eight-letter DNA double helix, and for practical use, we need to improve the accuracy and efficiency of replication and transcription into RNA, Hirao said in an email. He imagines that eventually they might be able to build up to even more letters.