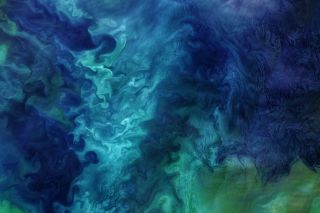 Billions of years ago, molecules on a lifeless and tumultuous Earth mixed, forming the first life-forms. Eons later, a larger, smarter form of life is huddling over lab experiments trying to understand its own beginnings.

While some say life emerged from simple chains of molecules, others say early chemical reactions formed self-replicating RNA. A relative of DNA, RNA acts as a decoder or messenger of genetic information. [7 Theories on the Origin of Life]

A new study provides evidence for the RNA idea, which is known as the "RNA world hypothesis." But at least one ingredient in early RNA may differ from what's found in the modern form, a group of scientists reported on Dec. 3 in the journal Proceedings of the National Academy of Sciences.

Modern RNA, alongside its sugar and phosphate backbone, is made of four main building blocks: nucleobases called adenine (A), cytosine (C), guanine (G), and uracil (U).

But it turns out that early RNA may have had one nucleobase that isn't part of the modern form.

In tiny plastic tubes, the researchers put water, a little bit of salt, buffer to keep the pH basic and magnesium ions to speed up reactions. These conditions are similar to those found in a freshwater lake or pond, a crater lake, or the kind of lake or pool found in volcanic regions such as Yellowstone National Park — all places that life could have started.

The researchers added the nucleobases (A, C, G and U) so they could bind to the template and thereby extend the shorter piece, the primer. Results showed that, with ingredients from modern RNA, the reaction didn't work fast enough for the RNA to form and replicate without errors.

But then, the researchers added another chemical, called inosine, into the mix, instead of the guanine-based molecule. After that, the researchers were surprised to find that RNA could form and replicate slightly more accurately than it does in a mix with guanine.

This mix didn't cause what's called an "error catastrophe," meaning that mutations or random mistakes in replications stayed below a threshold, ensuring they could be eliminated before accumulating.

"The fact that [the addition of inosine] surmounts the problem of error catastrophe is an important test of [the molecule’s] significance," said David Deamer, a biologist at the University of California, Santa Cruz, who was not part of the study. His only quibble is the claim that inosine is more plausible in the making of primitive RNA than other alternative bases, Deamer said. He doesn't yet think the other bases should be excluded, since "this is a fairly broad claim … based on a highly specific chemical reaction," Deamer told Live Science

But because inosine can be easily derived from another base pair, adenine, it makes the process of originating life "easier" than if you had to make guanine from scratch, said John Sutherland, a researcher into the chemical origins of molecular biology at the MRC Laboratory of Molecular Biology in the U.K., who was not part of the study either.

The findings break "the conventional wisdom that inosine couldn't have been useful," Sutherland told Live Science. Inosine had earned this reputation because it works a very specific job in a form of RNA called transfer RNA, which decodes genetic information.

Inosine was thought to "wobble," or bind to various base pairs rather than a single one. That would have made it a poor molecule for giving unique instructions to form new RNA, because there wouldn't have been clear direction for what inosine could bind with. And so, "a lot of us had wrongly thought that [wobble] was an inherent property of inosine," Sutherland said. But this study showed that inosine, in the early world context where RNA first emerged, doesn't wobble, but instead pairs reliably with cytosine, he added.

"It all makes sense now, but based on the older results, we didn't expect inosine to work as well as it did," said study senior author Jack Szostak, a professor of chemistry and chemical biology at Harvard University, who is also a Nobel laureate.

Szostak and his team are now trying to figure out how else that primitive RNA might have been different from modern RNA — and how it eventually turned into modern RNA. Also, much of their lab is focused on how RNA molecules replicated before enzymes evolved. (Enzymes are proteins that speed up chemical reactions.)

"This is a big challenge," Szostak told Live Science. "We've made a lot of progress, but there are still unsolved puzzles."

Sutherland also noted that the field is generally moving on from a pure "RNA world hypothesis" into one that sees more components mixed into the cauldron that created life. Those include lipids, peptides, proteins and energy sources. He added that in researchers' minds, "It's a less purist RNA world than it used to be."