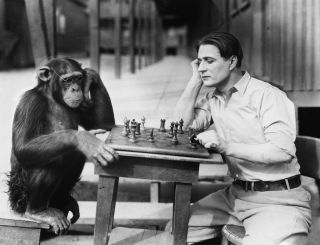 A vintage photograph of a man playing chess with a chimpanzee.
(Image: © Everrett Collection, Shutterstock)

Did modern life on Earth evolve over millions of years, or was it created in the blink of an eye by God?

That's the gist of the debate between scientists and creationists, which has been ongoing ever since Charles Darwin published his theory in 1859. The scientific evidence is clear: The Earth is about 4.5 billion years old, and all life evolved from primitive, single-celled organisms.

Nevertheless, Biblical literalists reject this evidence and operate from the viewpoint that the Bible's Book of Genesis is a historical account of creation. Here's how the battle has played out.

The Birth of the Battle

Strictly defined, creationism is based on a literal reading of the Bible's Book of Genesis, which describes the creation of the world and all the life in it over a period of six days. There are many flavors of creationists. Young-Earth creationists, including the Australian-born Ham, interpret the Bible to mean that the Earth was created more or less in its present state about 6,000 years old (In fact, it's about 4.5 billion years old). Other creationists believe in an older Earth, with species still created separately by God. Finally, believers in Intelligent Design hold that evolution might occur, but that a deity started or guides the process. [Top 10 Intelligent Designs (and Creation Myths)]

Advances in geology in the 1700s and 1800s shook the foundations of young-Earth creationism spread by preachers who interpreted the Bible literally. Charles Darwin's "The Origin of Species," published in 1859, complicated matters further. Now, science was not only shooting holes in the Biblical tale of a young Earth created in mere days, it was suggesting that God didn't even create all animals and plants.

p> Perhaps no battle in the creationism versus evolution war is more famous than the Scopes Monkey Trial. In 1925, Tennessee schoolteacher John Scopes incriminated himself for teaching evolution in a classroom, purposefully challenging a state law prohibiting evolution from being taught.

The trial was intended to generate publicity, and it worked like a charm. The cast was star-studded: Famous attorney Clarence Darrow defended Scopes, while the three-time populist Presidential candidate Williams Jennings Bryan prosecuted. Americans listened to the court proceedings over the radio.

In the end, Scopes was found guilty and fined $100. The Tennessee Supreme Court later overturned the verdict on a technicality, but upheld the law preventing evolution from being taught. [7 Theories on the Origin of Life]

After the trial, other states enacted their own anti-evolution laws. But gradually, the anti-evolution movement lost steam, and evolution snuck back into textbooks.

U.S. Gets Serious About Science

The teaching of evolution versus creationism was spotty until 1958. The Soviet Union had just launched the Sputnik satellite, and the United States was facing a shortage of mathematicians. Fearing that the Soviet Union was beating the United States in science literacy, President Dwight D. Eisenhower and Congress passed the National Defense Education Act, a funding bill designed to improve science education. The teaching of evolution got a shot in the arm from new textbooks, authored by scientists, made possible by the Act.

For all its drama, the Scopes Trial did not settle the issue of whether prohibiting evolution education in schools was unconstitutional. In 1968, the Supreme Court finally weighed in. In 1968, the Court, in the case Epperson v. Arkansas, determined that such bans violate the Establishment Clause of the First Amendment, which prohibits the government from establishing religion.

In 1987, the Supreme Court made another strike against creationism, using the same argument in Edwards v. Aguillard, which centered around a Louisiana law requiring that if evolution were taught, "creation science" must be taught alongside it.

All Eyes on Dover

As creationism lost in court, opponents of evolution turned toward arguing for "intelligent design," the idea that a creator guides the process of evolution. In 2005, a local school board in Dover, Penn., required teachers to kick off their biology classes by reading a statement about intelligent design. Parents took the district to court. In the case of Kitzmiller v. Dover, the judge ruled that the school board's rule was, in fact, unconstitutional. Intelligent design, the decision argued, is a religious theory, not a science.

In a highly hyped event, science communicator Bill Nye agreed to debate Ken Ham, the founder of Kentucky's Creation Museum and believer in a 6,000-year-old Earth. On Feb. 4, 2014, the two men went head-to-head for almost three hours. Whether or not any headway was made is up for debate, but the debate proved there's still an appetite for culture wars in the United States.