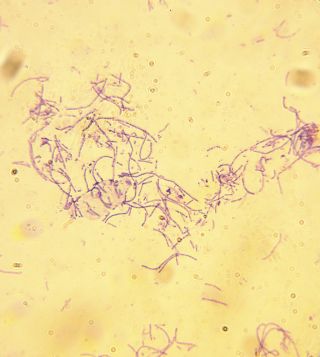 Anthrax is an infectious disease caused by the bacterium Bacillus anthracis. The bacteria live in soil and usually infect wild and domestic animals, such as goats, cattle and sheep.

Anthrax outbreaks are fairly common worldwide and mostly affect agricultural workers. Humans become sick with the disease by handling animal products such as wool, hide or bone from animals infected with the anthrax bacterium.

Anthrax can also be inhaled into the human respiratory tract — this pulmonary method of infection is most common among those who process wool and animal hides, according to the U.S. National Library of Medicine.

Those with pulmonary anthrax are at risk of respiratory collapse and suffer the highest mortality rate of any anthrax victims, with 92 percent of cases resulting in death.

The third form of the disease, gastrointestinal anthrax, can occur when a person consumes the meat of an anthrax-infected animal. This is the rarest form of anthrax in the United States, but it can be deadly: Between 20 and 60 percent of all gastrointestinal-anthrax cases result in death, according to the Centers for Disease Control and Prevention (CDC).

Anthrax can be created easily in a lab, and is incredibly durable: Spores of anthrax bacteria can lie dormant for years before entering a living host, where they reactivate and multiply. These characteristics make anthrax an extremely dangerous bioterrorism weapon.

Anthrax has been used in bioterrorism and warfare since World War I, when Scandinavia deployed anthrax against the Imperial Russian Army. It was also used by the British army during World War II to weaken German livestock.

More recently, anthrax has been used in bioterrorism attacks in both Japan and the United States. In 1993, a religious cult in Japan deployed anthrax against civilians in Tokyo, but the attack yielded no injuries or fatalities.

In 2001, letters containing anthrax spores were mailed to several news-media offices and two U.S. senators, resulting in the deaths of five people and the infection of 17 others.