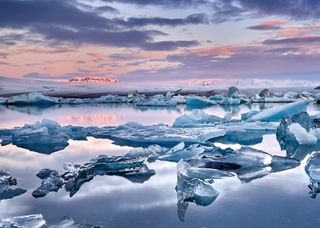 There are many type of ice formations. Do you know them all?
(Image: © Shutterstock)

Ice is found all over the world in a wide variety of forms. More than simply frozen water, the various forms of ice tell the story of their environment as they change with the seasons and show trends of the changing climate on Earth.

Scientists study core samples pulled from the depths of large ice formations, such as ice caps and glaciers, to uncover how the local climate has changed over hundreds of years and to help predict how climate will change in the future, said Melissa Hage, an environmental scientist and assistant professor at Oxford College of Emory University in Georgia.

Here we define the common terms that describe the various types of ice formations found around the world.

Glaciers are large, freshwater ice masses on land that are formed from falling snow that eventually becomes so heavy that it's compressed into ice, according to the National Snow and Ice Data Center (NSIDC). Glaciers range in size from about the length of a football field (120 yards, or 110 meters) to a few hundred miles long, and can be found on every continent.

Technically speaking, glaciers are smaller forms of ice caps and ice sheets, all of which are large masses of ice that slowly creep across the landscape, irrespective of what's underneath them. These slow-moving ice giants can traverse entire mountain ranges and even active volcanoes, according to Benjamin Edwards, a volcanologist at Dickinson College in Pennsylvania, who studies the interactions between glaciers and volcanoes.

Glaciers stop growing where they meet the ocean and the warmer saltwater melts the edge of the frozen freshwater mass. Warming ocean temperatures have increased the rate of melting of glaciers and other ice formations such as icebergs and ice shelves in or next to the ocean, according to Justin Burton, a physicist at Emory College in Georgia, who studies the physics of glacier loss. Glaciers are one of the best environmental indicators for climate change, due to the visible changes they undergo over time scales as short as a few days.

Icebergs are large, floating masses of freshwater ice that have broken apart from glaciers, ice sheets or ice shelves and fallen into the ocean, according to the National Oceanic and Atmospheric Administration (NOAA). In order to be called an iceberg, the ice mass must rise more than 16 feet (4.9 m) above sea level, be between 98 feet and 164 feet (30 to 50 m) thick and cover an area of at least 5,382 square feet (500 square m).

Icebergs can also be tabular in shape, which indicates the iceberg snapped off the edge of an ice shelf. Also known as ice islands in the Arctic, these large, rectangular ice forms typically have flat tops with nearly perpendicular sides.

Ice sheets are the largest ice formations in the world. These enormous plains of ice cover more than 20,000 square miles (50,000 square km), according to NSIDC. There are only three ice sheets on Earth, which cover Greenland, West Antarctica and East Antarctica. During the last ice age, ice sheets also covered large areas of North America, South America and Northern Europe.

Over the past few decades, parts of the ice sheet over Antarctica have been steadily melting. While it may seem like only a relatively small amount of the ice sheet has melted, it's enough to have caused the elevation of the continent to increase, much like Iceland at the end of the last ice age, Edwards told Live Science. Iceland went through a period of increased volcanism during that time, potentially due to the crust rebounding after ice no longer weighed it down. The same outcome could become a concern for west Antarctica, Edwards said, "although we don't really understand that area well enough to know for sure."

Ice caps are ice sheets that are smaller than 20,000 square miles (50,000 square km). These ice structures typically form in polar regions that are mostly flat and at high altitudes, according to NSIDC. Iceland, for example, is mostly covered by ice caps. The Vatnajökull Ice Cap on the east side of Iceland is the largest ice cap in Europe, covering about 3,127 square miles (8,100 square km) and averaging 1,300 feet (400 m) thick.

Ice fields and ice caps are very similar in size and location, and only differ in how the ice flow is influenced by its surroundings, according to the National Park Service (NPS). Ice fields contain mountains and ridges that pop out of the ice surface and alter how the ice flows, much like a large boulder peeking above the surface of a stream, causing the water to flow around it. Ice caps, on the other hand, build themselves on top of any terrain and spread out from their center.

An ice mélange is essentially a giant slushy that forms within glacial fjords that are made up of sea ice, icebergs and the smaller relatives of icebergs, according to Burton. The mélange forms when ocean currents or surface winds fail to move the mass of ice out of the fjord, forming a partial boundary between the glacier and ocean.

Ice mélanges are considered the world's largest granular material because of the large amount of suspended sediment and liquid that's contained within the ice slush, Burton said.

Because ice mélanges aren't solid ice, the relatively warmer ocean water can seep through the ice to the face of the glacier. This characteristic means the ice mélange has a major influence on how much a glacier breaks apart and how much fresh water enters the fjord.

The majority of the Earth's ice shelves are found around the coast of Antarctica, but they can also be found anywhere that land ice, such as a glacier, flows into the cold ocean, according to NSIDC. The shelves are made of floating sheets of ice that connect to a landmass. They're formed when ice slowly flows from glaciers and ice streams onto the ocean, but the ice doesn't melt right away due to cold ocean temperatures. The shelves then get built up from additional ice flowing from the glaciers.

Ice streams are rivers of ice sheets that flow relatively faster than the surrounding ice, typically moving about half a mile (800 m) per year, on average.

Jakobshavn Glacier in Greenland, the fastest-flowing glacier in the world, is sometimes classified as an ice stream. According to a 2014 article published in the journal Cryosphere, Jakobshavn moves at a rate of about 10.5 miles (17 km) per year.

Sea ice is frozen salt water and is found in remote polar oceans. It covers about 9.65 million square miles (25 million square km) of the Earth per year on average, according to NSIDC.

Sea ice is vital to the ecosystems and climate of the polar regions and can also influence ocean circulation and weather, according to NASA's Earth Observatory. These chunks of saltwater ice reduce the erosion of ice shelves and glaciers near the coastlines by minimizing waves and wind, and create an insulating surface to reduce evaporation of water and heat loss to the atmosphere. During the warmer summer months, melting sea ice releases nutrients back into the ocean and exposes the surface of the ocean to sunlight, both of which stimulate the growth of phytoplankton, which are the foundation of the marine food web.

As Earth's climate undergoes rapid changes, sea ice has been melting at a faster rate than it can refreeze. This is especially apparent in the Arctic, where ocean and land temperatures are rising faster than they are at any other place on Earth, Edwards said.

The frozen Earth, nicknamed Snowball Earth, refers to periods in time in the geological record when the majority, if not all, of the planet was frozen, according to the Dartmouth Undergraduate Journal of Science.

"Four ice ages, between 750 and 580 million years ago, may have been so severe that the Earth's entire surface, from pole to pole, including the oceans, completely froze over," Hage said. "Once the polar oceans began to freeze, more sunlight was reflected off the white ice surfaces and cooling was amplified."

Scientists estimate that the average temperature on Earth dropped to minus 58 degrees Fahrenheit (minus 50 degrees Celsius) during these periods and that the water cycle (the cycle in which water goes between the atmosphere, land and oceans) shut down.

But there is some debate as to whether the Earth was completely frozen solid or if there were still patches of slushy or open water at the equator where sunlight could enter the water and allow some organisms to survive.

Scientists believe that at some point, carbon dioxide levels increased in the atmosphere, most likely due to volcanoes, which increased the temperature enough to restart the water cycle. The increased amount of water vapor in the air, in addition to the carbon dioxide, triggered a period of runaway heating, increasing global temperatures to 122 degrees F (50 degrees C) over a few hundred years, Hage said. Slight light changes in Earth's orbit or axial tilt eventually brought the planet's average temperature to the current life-supporting temperature of 58.6 degrees F (14.9 degrees C).

Research suggests that a huge explosion of life, known as the Cambrian explosion, occured at the end of the snowball period, according to the University of California Museum of Paleontology. It is the earliest known period within the fossil record in which major groups of animals (such as brachiopods and trilobites) first appear over a geologically brief period of time (approximately 40 million years).