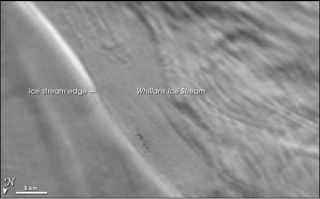 Glacial ice streams are enormous frozen rivers that are always on the move, just like their watery brethren ?but not necessarily in a constant flow. Many ice streams, such as the Whillans Ice Plain in West Antarctica, move in stops and starts that trigger seismic activity.

"It's mostly just creeping along, and once a day or every few days, the tidal motion will trigger a 'slip event,'" said Slawek Tulaczyk, professor of earth science at the University of California Santa Cruz. "It's more drastic than on other ice streams."

An ice stream, essentially a type of glacier that flows within ice sheets, can be more than 100 miles (160 kilometers) wide and a mile (1.6 km) deep. The movement of ice streams has been a matter of study for decades, but there are still a lot of questions about their inner workings. Jake Walter, a geophysics graduate student at UC Santa Cruz, has been studying the interior movements of the Whillans Ice Plain to better understand the schizophrenic motion of ice streams.

The Whillans Ice Plain's jerky movement is known as "stick-slip." All ice streams are moved by tidal motions, and researchers had always assumed it was a fairly smooth process. But stick-slip movement is just what it sounds like: The ice will slip and then stop, almost as if it was stuck.

Walter and his colleagues used GPS receivers to measure the movement of the ice stream and recorded far more erratic movement than they expected. The Whillans Ice Plain will shift about 1.6 feet (0.5 meters) once or twice a day. Each time it moves, the ice stream sends out seismic waves traveling 100 to 300 meters (330 to 980 feet) per second. That seismic activity is not strong enough to be felt by humans.

Tulaczyk told Our Amazing Planet that Walter has seen early evidence that ice streams may be influenced not only by tidal movement  but by large earthquakes far away. [Stunning Photos of Antarctic Ice]

"These systems — and this one in particular — are very sensitive to change," he said. "Tidal modulations are quite small, and the fact they can change the behavior of a large piece of ice is quite surprising and tells us something fundamental about how the system works."

Walter is collecting evidence that slips are also induced by strong earthquakes in other areas of the globe, such as the 9.0 magnitude earthquake that struck Japan March 11 and triggered a devastating tsunami.

The research highlights the fact that climate is just one force acting on the ice. Many processes, including an ice stream's own internal dynamics, have an impact on its behavior, Tulaczyk said.

Although much of the focus of glacial research is on global warming, Tulaczyk said it's important to remember that these formations are sensitive to changes in more than just temperature.