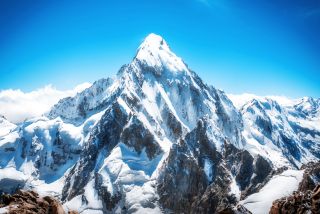 The peak of Mount Everest is the highest point in the world.
(Image: © Shutterstock)

Imagine a world where mountains grow so high, they poke through the upper atmosphere and create a rocky maze for pilots to navigate.

Maybe that world exists somewhere in the far reaches of the universe. But on Earth, mountains can't grow much higher than Mount Everest, which extends 29,029 feet (8,840 meters) above sea level.

So what stops our planet's mountains from growing … forever?

There are two major factors that limit mountains' growth, said Nadine McQuarrie, a professor in the department of geology and environmental science at the University of Pittsburgh.

The first limiting factor is gravity. Many mountains form because of movements in Earth's surface layer known as plate tectonics; this theory describes the Earth's crust as mobile and dynamic, divided into large pieces that inch around with time. When two plates collide, the impact forces material from their touching edges to move upward. This is how the Himalayas mountain range in Asia, which includes Mount Everest, formed.

Related: Which Mountain Is the Tallest in the World?

The plates keep pushing together and the mountains keep growing, until it becomes "too hard to do that work against gravity," McQuarrie told Live Science. At some point the mountain becomes too heavy, and its own mass stops the upward growth caused by the crunching of those two plates.

But mountains can also form in other ways. Volcanic mountains, like those of the Hawaiian Islands, for example, form from molten rock that erupts through the planet's crust and begins piling up. But no matter how mountains are formed, they eventually become too heavy and succumb to gravity, McQuarrie said.

In other words, if Earth had less gravity, its mountains would grow higher. That is indeed what happened on Mars, where mountains loom much taller than on our planet, McQuarrie added. Mars' Olympus Mons, the tallest known volcano in the solar system, extends 82,020 feet (25,000 m) high, nearly three times taller than Mount Everest.

Most likely because Mars has low gravity and high eruption rates, mountain-building lava flows continued on Mars for much longer than they ever have (or ever will) on Earth, according to NASA. What's more, Mars' crust isn't divided up into plates like that of our planet. On Earth, as plates move around and over hotspots — areas of the mantle that shoot out hot plumes — new volcanoes form and existing volcanoes become extinct. Activity in Earth's mantle distributes lava  across a larger region, forming multiple volcanoes. On Mars, the crust doesn't move so the lava piles up into a single, massive volcano.

The second limiting factor for mountain growth on Earth is rivers. At first, rivers make mountains appear taller — they carve into the edges of the mountains and erode material, creating deep crevices near a mountain's base. "All of these really high, beautiful, dramatic peaks are actually a little bit lower than the plateau itself," McQuarrie said. But as rivers erode material, their channels may become too steep. This can trigger landslides that carry material away from the mountain and limit its growth, she added.

A group of researchers recently suggested that rivers reach a "threshold steepness" after which their impact on a mountain's growth through erosion is limited in a study published Sept.16 in the journal Nature Geoscience.

Underwater mountains are similarly limited by gravity and landslides but they can get much taller than the mountains on land can because the higher-density water supports them against gravity more than air does, McQuarrie said. "Water provides lateral support to the sides of these mountain ranges allowing them to be higher," she said.

Everest is often referred to as Earth's highest summit, but there are other contenders for the "world's tallest mountain" title. Mauna Kea, an inactive volcano in Hawaii, is the world's tallest mountain if measured from its base — which sits deep in the Pacific Ocean — to its summit. It measures 33,500 feet (10,210 m), a little bit taller than Everest. But Mauna Kea's base is 19,700 feet (6,000 m) below sea level and its peak is at 13,796 feet (4,205 m) above sea level. When measuring from sea level, Mount Everest is over two times taller than Mauna Kea, and Everest's peak is the highest point in the world.