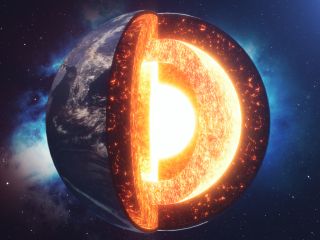 Underground continents deep in Earth's belly may have formed when an ancient ocean of magma solidified on the surface of the baby planet 4.5 billion years ago, according to a new study.

The finding was detailed in a fascinating story on the American Geophysical Union blog GeoSpace.

As reporter Abigail Eisenstadt explains, scientists have known about these buried blobs of hot, compressed rock since the 1970s. Earthquakes reverberate through the rest of the mantle at a steady pace, but hit serious speed bumps when they rumble through these massive hunks of stone. These peculiar patterns of seismic activity helped scientists spot the continents on the border of Earth's mantle and molten outer core, but they still don't know when or how the structures emerged. Some scientists theorize that bits of the planet's crust dipped down into the mantle, broke off and clumped together over time, Geospace reported.

Now, new analyses of volcanic rock paint a different picture: The underground continents may be as old as Earth itself, and likely survived the planet-rocking impact that first formed the Moon, the study authors reported July 31 in the journal Geochemistry, Geophysics, Geosystems.

It’s amazing that these regions have survived most of Earth’s volcanic history relatively untouched, study co-author Curtis Williams, a geologist at the University of California, Davis, told GeoSpace.

Williams and his colleagues compiled new and existing data on geological samples from Hawaii, Iceland, the Balleny Islands in Antarctica and other regions where insanely hot rock bubbles up from the planet's core all the way to the surface. The samples break through the crust as lava, and cool into igneous rocks, according to GeoSpace. Samples born in the planet's interior carry ancient isotopes, or versions of atoms, such as helium-3, which were forged during the Big Bang. That’s because oxygen exposure strips many of these chemicals from rocks formed near the crust. The team identified samples that carried the primordial isotopes, and then attempted to retrace the rocks' paths to the surface.

In the past, many geological models assumed columns of rock from the mantle — called deep mantle plumes — rose to the surface in orderly straight lines, GeoSpace reported. But these plumes have been known to ricochet and change course on their journey to the crust. The researchers developed a model that noted the zig-zagging nature of deep mantle plumes and thus were able to trace certain samples back to the underground continents.

"It's a more robust framework to try and answer these questions in terms of not making these assumptions of vertically rising material but rather to take into account how much deflection these plumes have seen," Williams told GeoSpace. From there, Williams and his team could deduce what materials the massive blobs were made of, and when they may have formed.

You can read more about the study at GeoSpace.