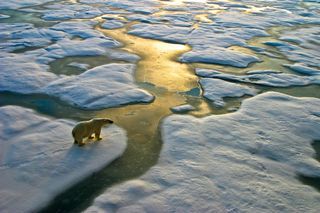 Polar bears, like this one in the Russian Arctic, rely on sea ice for hunting.
(Image: © SeppFriedhuber/Getty Images)

'Tis the season of snowy nights and reindeer pulling sleighs — except in the actual Arctic, where climate change is wreaking havoc on a real-world winter wonderland.

A new "report card" from the National Oceanographic and Atmospheric Administration (NOAA) Arctic Program paints a dire picture for the frozen North. According to the program's 2018 Arctic Report Card, Arctic surface air temperatures are warming twice as fast as in the rest of the globe, while populations of wild reindeer and caribou have tumbled by 50 percent over the last 20 years.

And the Arctic is setting alarming new records all the time. Air temperatures from 2014 to 2018 in the Arctic were warmer than in any prior year dating back to 1900, according to the report. The past 12 years have shown the lowest extents on record of Arctic sea ice. And the Greenland ice sheet is melting faster than it has in at least 350 years. [Images of Melt: Earth's Vanishing Ice]

"As a result of atmosphere and ocean warming, the Arctic is no longer returning to the extensively frozen region of past decades," the report's authors wrote.

The annual report is the 13th issued by NOAA's Arctic Program. One of the most dramatic changes in today's Arctic, the report found, is the loss of the region's sea ice. The winter maximum sea ice of 2018, measured in March, was the second lowest in 39 years of record-keeping, behind only 2017. In 1985, the report authors wrote, ice that had survived multiple years of freezing and thawing made up 16 percent of the Arctic's sea ice. Today, that number is a mere 1 percent. The thinner, single-year ice that makes up 99 percent of the ice pack is more prone to melt and flow.

Sea ice attached to the coast is also shrinking in area, extending only about half as far offshore in the modern era as compared to the 1970s.

Sea ice is disappearing all over the Arctic, the report's authors found, and in every month of the year. Average sea-ice thickness is also declining. Changes in the Arctic extend outward, the report's authors added, as warming in the far north seems to be altering ocean and atmospheric circulation, stacking the deck for extreme snowstorms like the "Beast from the East" polar vortex that hit the United Kingdom in February 2018.

Warming temperatures, lost sea ice and long-term declines in snowpack on land have caused chaos for the Arctic's wildlife. While reindeer are mythologized in Christmas carols, real herds are suffering. Wild reindeer and their fellow foragers, tundra caribou, have been in decline since the 1990s, according to the report. Where there were once 4.7 million animals combined, there are now 2.1 million. Of 22 herds being monitored by researchers today, 20 are on the decline.

Climate is to blame for much of the decline, according to the report. Longer, warmer summers mean more parasites and heat stress for the winter-adapted grazing animals, along with a greater risk of grass-killing drought.

Meanwhile, toxic algal blooms driven by warming waters represent a new threat to marine life in the Arctic, the researchers wrote. Algal toxins have been found in ill or dead animals ranging from seabirds to seals to whales.

"Continued warming of the Arctic atmosphere and ocean are driving broad change in the environmental system in predicted and also unexpected ways," the report's authors concluded. "New and rapidly emerging threats are taking form and highlighting the level of uncertainty in the breadth of environmental change that is to come."