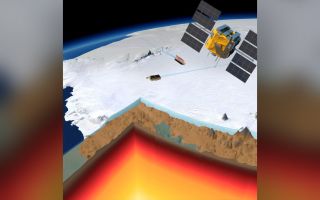 In an illustration of the Amundsen Sea Embayment in West Antarctica, a cutaway reveals the bedrock below the ice, as well as Earth's crust (brown layer), the bottom of the lithosphere (red area) and the mantle (yellow) underneath.
(Image: © Planetary Visions/ESA)

Bedrock under Antarctica is rising more swiftly than ever recorded — about 1.6 inches (41 millimeters) upward per year. And thinning ice in Antarctica may be responsible.

That's because as ice melts, its weight on the rock below lightens. And over time, when enormous quantities of ice have disappeared, the bedrock rises in response, pushed up by the flow of the viscous mantle below Earth's surface, scientists reported in a new study.

These uplifting findings are both bad news and good news for the frozen continent.

The good news is that the uplift of supporting bedrock could make the remaining ice sheets more stable. The bad news is that in recent years, the rising earth has probably skewed satellite measurements of ice loss, leading researchers to underestimate the rate of vanishing ice by as much as 10 percent, the scientists reported. [Images of Melt: Earth's Vanishing Ice]

Interplay between bedrock and mantle in Antarctica is just one of the many geologic processes that happen all over our dynamic planet. Under Earth's crust cover, the molten mantle extends over 1,796 miles (2,890 kilometers) down to Earth's core. Mantle movement is known to ripple up and affect the crust's tectonic plates, as these plates ride convection currents in the mantle's outermost part, known as the lithosphere.

But while computer models give scientists an idea of how the mantle behaves, the picture is incomplete, lead study author Valentina Barletta, a postdoctoral researcher at DTU Space, the National Space Institute at the Technical University of Denmark, told Live Science.

"The study of this — the distribution of viscosity in the mantle — is still in its infancy," Barletta said. "We know where the Earth is hotter and cooler — more or less. However, the viscosity of the mantle depends not just on temperature, but also on water content." Estimating the temperature of the mantle in a given area could therefore give an inaccurate view of how fast-moving it is — a cooler patch with high water content could be just as viscous as a hotter zone that contained less water, Barletta explained.

Dramatic changes such as those that the researchers observed in Antarctica's bedrock — nudged upward by the mantle below — were thought to happen over thousands, or even tens of thousands, of years. Their new findings show that this shift in response to vanishing ice can take place much more rapidly, over centuries or decades. This suggests that the mantle under Antarctica, which is lifting the bedrock upward, may be more fluid, flowing more quickly than previously suspected, the study authors reported.

Antarctica's bedrock is difficult to study because most of it is covered by thick layers of ice; the continent's ice sheet cover holds about 90 percent of all the ice on Earth, containing enough water to elevate sea levels worldwide by about 200 feet (61 meters), according to NASA. To measure how it was changing, the researchers installed six GPS stations at locations around the Amundsen Sea Embayment (ASE), a region of the ice sheet roughly the size of Texas, that drains into the Amundsen Sea. They places the GPS monitors in places where bedrock was exposed, gathering data at a spatial resolution of 0.6 miles (1 km), higher than any recorded in prior studies.

The scientists expected to see some evidence of slow uplift in the bedrock over time, which could be linked to historic ice loss — because "when ice melts, the earth rebounds elastically," Barletta said. Instead, they saw that the rate of the uplift was about four times faster than anticipated from ice-loss data. The velocity of the rebound in the ASE — 1.6 inches (41 millimeters) per year — was "one of the fastest rates ever recorded in glaciated areas," study co-author Abbas Khan, an associate professor at DTU Space, said in a statement.

Their findings suggested that the mantle underneath is fast-moving and fluid, responding rapidly as the heavy weight of ice is removed to push the bedrock upward very quickly, Barletta said. [Icy Images: Antarctica Will Amaze You in Incredible Aerial Views]

An uncertain future for Antarctica's ice

The bedrock uplift is a result of ice loss over the past century, but ice continues to vanish from parts of Antarctica at a dramatic rate, spurred by human-induced climate change. An estimated 3 trillion tons of ice have vanished from the continent since 1992, causing about 0.3 inches (around 8 mm) of sea level rise. And scientists recently predicted that the West Antarctic Ice Sheet (WAIS) could collapse entirely within the next 100 years, leading to sea level rise of up to nearly 10 feet (3 meters).

But the researchers suggest that there may be a ray of hope for the weakening WAIS. The deforming bedrock under Antarctica, buoyed by a fluid mantle, could provide an unexpected source of support for the WAIS, the scientists discovered. In fact, the bedrock's uplift could stabilize the WAIS enough to prevent a complete collapse, even under strong pressures from a warming world.

There's a downside to their findings, too. Estimates of ice loss in Antarctica depend on satellite measurements of gravity in localized areas, which can be affected by significant changes in mass. If the bedrock under Antarctica is rapidly adjusting in response to ice loss, its uplift would register in gravity measurements, compensating for some ice loss and obscuring just how much ice has truly disappeared by about 10 percent, according to the study.

Hopefully, now that scientists are aware of this discrepancy, it can be addressed in future models of disappearing ice, Barletta said.

The findings were published online today (June 21) in the journal Science.