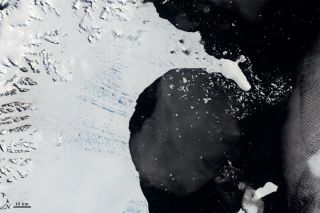 The mysterious disintegration of a giant Antarctic ice shelf that had been stable for millennia was caused by a chain reaction of lakes draining on top of the ice, researchers say.

This finding suggests that other ice shelves could be vulnerable to such abrupt collapses, the researchers said.

Scientists investigated the spectacular 2002 breakup of Antarctica's Larsen B Ice Shelf, a vast plate of ice larger than Rhode Island that once covered more than 1,160 square miles (3,000 square kilometers). The ice shelf (the tongue of a glacier that floats on the ocean) had been stable for thousands of years but crumbled into thousands of icebergs over the course of just a few days.

Before the ice shelf fell apart, more than 2,750 lakes existed on top of it. These "supraglacial lakes" formed as ice and snow gradually melted over the preceding years. [Album: Stunning Photos of Antarctic Ice]

"The lakes tend to pool in place, rather than running off the ice shelf into the ocean, as the ice shelf is very flat," said study lead author Alison Banwell, a glaciologistat the University of Chicago.

The researchers noted that in the days right before the ice shelf collapsed, the majority of these lakes drained. However, scientists didn't know why.

Two mysteries with one simulation

Now, computer simulations have solved two mysteries at once — what made the lakes disappear, and how the ice shelf broke up so quickly.

The model analyzed the stresses the supraglacial lakes created on the ice shelf. The scientists discovered that the draining of just one of these lakes down into the ice could trigger the formation of cracks in the ice under neighboring lakes. These cracks could, in turn, lead numerous lakes to empty, causing fractures to arise under more lakes — a chain reaction.

"Although previous studies have suggested that the widespread breakup of the Larsen B Ice Shelf was probably due to the drainage of almost 3,000 surface lakes, no previous study has explained how and why these lakes would have drained within just a few days in order to cause such a rapid and explosive breakup event," Banwell said. "Our suggestion that the drainage of one single 'starter' lake can produce multiple fractures that are able to drain hundreds of surrounding lakes through a chain-reaction process is, therefore, of crucial importance. We argue that it was this chain-reaction process which contributed to the abruptness of the explosive disintegration of the Larsen B Ice Shelf."

More breakups on the way?

If current warming trends prevail, "lake-induced breakup may threaten other Antarctic ice shelves and cause them to disintegrate in a similarly dramatic way," Banwell told LiveScience.

It's important for scientists to determine the risk of Antarctic ice-shelf collapses because these vast blocks of ice essentially serve as dams for the glaciers flowing into them. The removal of these buttresses causes glaciers to feed more ice to the ocean, "which ultimately causes sea levels to rise," Banwell said. "The next to go is likely to be the Scar Inlet, followed by the Ross and Ronne-Filchner ice shelves." (At a recent scientific meeting, Ted Scambos, a glaciologist with the National Snow and Ice Data Center in Boulder, Colo., predicted that the Scar Inlet Ice Shelf, which is a remnant of the Larsen B Ice Shelf, would be the next to go.)

The ultimate proof of this idea "may only come when the next ice shelf collapses," Banwell concluded.

Banwell and her colleagues Douglas MacAyeal and Olga Sergienko detailed their findings in the Nov. 28 issue of the journal Geophysical Research Letters.