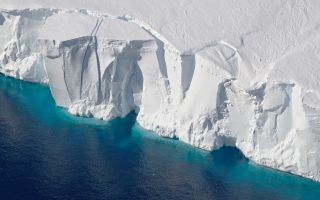 On the Getz Ice Shelf in western Antarctica, photographed on Nov. 5, 2017, ice is in the process of calving from the front of the shelf, soon to become an iceberg.
(Image: © NASA/Jeremy Harbeck)

Antarctica has lost 3 trillion tons of ice in the past 25 years, and that ice loss has accelerated rapidly over the last five years.

In a new study, the most comprehensive to date of the continent's icy status, an international group of 84 researchers analyzed data from multiple satellite surveys, from 1992 to 2017.

They discovered that Antarctica is currently losing ice about three times faster than it did until 2012, climbing to a rate of more than 241 billion tons (219 billion metric tons) per year. Total ice loss during the 25-year period contributed to sea level rise of about 0.3 inches (around 8 millimeters), approximately 40 percent of which — about 0.1 inches (3 mm) — happened in the past five years. [In Photos: Antarctica's Larsen C Ice Shelf Through Time]

Millimeters of sea level rise may not sound like much, but previous surveys suggested that Antarctica's massive ice sheets likely wouldn't be affected by climate change at all. The new findings hint that the continent's ice cover may not be as resistant to warming as once thought, and present a very different picture of Antarctica's potential contributions to a rising ocean: Consider that if all of Antarctica's ice melted, the resulting water could elevate sea levels by about 190 feet (58 meters), the researchers reported.

Their study, published online today (June 13) in the journal Nature Research, is one of five Antarctica reports released simultaneously. Together, the studies evaluate past and present conditions in Antarctica to determine the impact of climate change and human activity on the continent, and to present strategies for the future of its ecology and geology.

For the new study, the scientists combined data from three types of satellite measurements to track changes in ice over time, study co-author Andrew Shepherd, a professor of Earth observation with the School of Earth and Environment at the University of Leeds in the U.K., told Live Science.

Satellites that scanned Antarctic ice with altimeters gathered evidence about its volume; another type of satellite measurement tracked the speed of glacial flow into the ocean; and a third type of observation calculated the gravity of land masses around the planet, weighing the ice sheets in their entirety.

On their own, each of these techniques held uncertainties; certain factors such as variable snowfall on top of the ice or changes in the rock underneath it could affect the satellite measurements. By looking at all these types of measurements together, the study authors could more confidently set aside data that did not represent ice cover, Shepherd explained.

"The satellite measurements tell us that the ice sheet is much more dynamic than we used to think," he said.

"If you take a look at the first IPCC [Intergovernmental Panel on Climate Change] assessment report — 30 years ago, before we had satellite measurements of the polar regions — you'll see that the ice sheets were not expected to respond to climate change at all. The general consensus in glaciology was that ice sheets couldn't change rapidly — but that's not the case," Shepherd said.

In total, an estimated 3 trillion tons of ice vanished from Antarctica during the 25-year survey period. To put that into perspective, the massive iceberg that broke off from Antarctica's Larsen C ice shelf in July 2017 — one of the largest icebergs in recorded history — weighed over 1 trillion tons, and was roughly the size of the state of Delaware. [In Photos: Antarctica's Larsen C Ice Shelf Through Time]

The greatest change in annual ice loss was in West Antarctica, averaging around 58 billion tons in the years leading up to 2012, then skyrocketing to 175 billion tons per year in the five years since. Meanwhile, in the Antarctic Peninsula, the annual rate of ice loss increased from around 7 billion tons from 1992 to 2012 to 36 billion tons from 2012 to 2017, largely due to collapsing ice shelves.

Even though Antarctica is covered in ice year-round, its ice sheets retreat and advance in annual cycles, a pattern that has persisted for thousands of years. But clues from the geologic record suggest that the climate change driving ice loss in Antarctica is doing so much faster than during its periods of ice loss in the distant past, Shepherd told Live Science. [Monster Antarctic Iceberg Gets Its Big Break in First-of-Its-Kind Video]

Ancient ice sheets leave behind signs of their presence in the land they covered, and this evidence is revealed when retreating glaciers expose the ground beneath them. Scientists can also detect markers of where ice sheets once covered Antarctica by looking at the seabed around the western part of the continent, which holds traces of where glaciers were pinned in the past, Shepherd explained.

Those signs help researchers to gauge the pace of ice retreat in Antarctica — estimated in the past to be about 164 feet (50 meters) each year — between glacial cycles, Shepherd said. However, ice retreat today is about more than 20 times that rate — more than 3,200 feet (1 kilometer) per year.

Scientists also looked at traces of organisms that live beneath floating ice shelves of the Antarctic Peninsula, specifically at the balance between organisms that thrive in light and those that excel in darkness. The results revealed that the ice shelves in Antarctica have been in place for about 10,000 years, "so the fact that they're collapsing today is unprecedented, and the pace of retreat and collapse of ice shelves is many times faster than we would expect from the normal glacial cycles," Shepherd said.