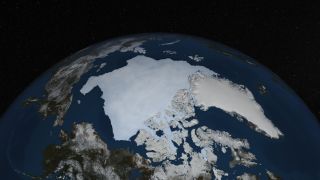 The sea ice around Antarctica reached a record high in August of 7.2 million square miles (18.6 million square kilometers) — the greatest extent observed since recordkeeping began in 1979.

But as Antarctic sea ice grows, the sea ice of the Arctic is shrinking dramatically. The Northern ice cap reached a record low of 1.32 million square miles (3.42 million square km) in September 2012, due to warming air and waters.

If the Earth is warming, and both ends of the planet are affected by climate change, why, then, are the two poles showing such different trends?

For one thing, the North Pole and South Pole have fundamentally different geography. Antarctica is a huge icy continent surrounded by a ring of sea ice, whereas the Arctic ice cap floats on the ocean. And unlike Arctic ice, Antarctic sea ice is seasonal — it forms in winter and melts almost completely in summer. Strong circumpolar winds may be compacting and thickening the Antarctic ice. But the Arctic ice is much more vulnerable to ocean warming, and summer storms only speed up the thaw. [10 Things You Need to Know About Arctic Sea Ice]

Recent trends show Antarctica's Southern Ocean is warming. “Why would sea ice be increasing?" Jinlun Zhang, an oceanographer at the University of Washington's Applied Physics Laboratory, in Seattle, asked in a statement. "Although the rate of increase is small, it is a puzzle to scientists."

Zhang and colleagues created a model that suggests strong winds swirling around the South Pole are responsible for the icy expansion. The winds make the sea ice move faster, causing it to deform into thick ridges that are harder to melt, Zhang told LiveScience. The bunching of the ice creates regions of thinner ice and open water. In winter, these areas lose heat from the water more easily, so more ice forms. In summer, the sun warms the water, but there is very little ice to melt.

Scientists don't know what could be causing these powerful winds. Some have suggested the ozone hole over the Southern Hemisphere could be changing wind patterns in the jet stream over Antarctica, pushing clouds toward the South Pole.

Most climate models say the Antarctic sea ice should be decreasing, but a slight increase is within the realm of natural variability, said climate scientist Julienne Stroeve of the National Snow & Ice Data Center (NSIDC).

"Antarctica is quite cold, and even 5 degrees Celsius [9 degrees Fahrenheit] of warming is not going to make much of a difference," Stroeve told LiveScience.

That same amount of warming would affect the Arctic dramatically.

As the Arctic sea ice undergoes massive summer melts, the ocean absorbs more of the sun's energy, causing the ocean water to further heat up.

The Arctic is becoming more like the Antarctic, in that the sea ice cover is seasonal, Stroeve said.

In August 2012, a giant summer cyclone churned up the Arctic sea ice, breaking it into pieces that melted more easily. Other storms have had the opposite effect, injecting snow and cool air above the shrinking North Pole. But as global warming increases the number of severe storms, scientists fear more record melts may be ahead. And that melt has consequences.

The shrinking ice is affecting not just the polar bears that have received so much attention, but the entire ecosystem, Stroeve said. Less ice means more sunlight and warmer waters in summer, but less insulation and cooler waters in winter. The changes will affect the plankton at the base of the food chain, their predators, and so on up to the top of the chain, affecting polar bears and humans.

What's less clear is when the Arctic ice might disappear completely. Most studies measure the extent of sea ice, because that can be seen from satellites. But a better metric would be sea ice thickness, Stroeve said.

Given the extensive Arctic ice melt, many climate scientists are turning their attention to the impacts on climate and weather patterns.

The growth in Antarctic sea ice does not contradict global warming trends seen in the Arctic. "There's still a lot of natural climate variability," and sometimes, natural trends and climate change are out of phase with each other, Stroeve said.