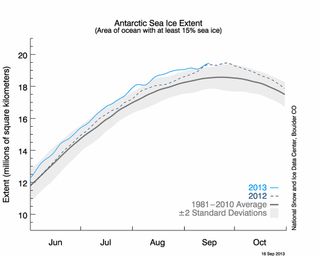 Sea ice surrounding Antarctica hit a record high in August and is on track for another record-breaking month in September. Clocking in at a stunning 7.2 million square miles (18.7 million square kilometers), last month's sea ice extent was 4.5 percent above the 1981 to 2010 average and the largest extent since record-keeping started in 1979, according to data released today from the National Oceanic and Atmospheric Administration in its monthly State of the Climate Report.

The record sea ice doesn't contradict global warming. Because Antarctic sea ice encircles a frozen continent, the factors controlling its growth are complex, and include winds, warming air temperatures and even the ozone hole. Wind plays a greater role the size of the ice pack than air temperature or ocean currents, according to a study published in the Nov. 11, 2012, issue of the journal Nature Geoscience. The fierce circumpolar winds carry frigid air from the continent to the sea, freezing the ocean's surface and pushing the ice around. The August ice surge was likely due to weather patterns that favored more ice, the Antarctic Sun reported.