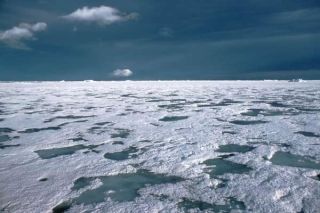 The term "sea ice" has been sending shivers down many spines with the growing threat of global warming, but many non-scientists still misunderstand what sea ice really is.

Sea ice is a thin, fragile, solid layer of frozen ocean water that forms in the Arctic and Antarctic oceans. Not to be confused with icebergs, which are made of fresh water from compacted snow, salty sea ice is perhaps the most dangerous symptom of the Earth's rising temperatures.

Sea ice forms on the ocean's surface in chilly temperatures, starting as a thin slate of crystals that grow outward into a sheet of salty ice. Then the sea ice grows downward and thickens. Sea ice is mobile winds and ocean currents often push it around on the surface of the ocean.

Although many might suspect that all salinity would be lost in the icing process, if one were to eat sea ice, it would taste very salty! Salt particles are trapped in the ice crystals as they freeze.

Although sea ice normally melts in the warmer summer months, global warming is further affecting its formation. As climate change heats the upper ocean, sea ice will begin melting from below at more rapid and dangerous rates.

The volume of Arctic sea ice has been shrinking for the past 30 years, according to the National Snow and Ice Data Center. This has forced more broken pieces of ice to float in our oceans and seas, which is dangerous because it raises worldwide sea levels.

Arctic sea ice helps to keep the polar regions cool and helps moderate the global climate. Because sea ice has a bright surface, 80 percent of the sunlight that strikes it is reflected back into space. But when sea ice melts, it exposes the dark ocean surface, which reflects less light and causes Arctic temperatures to rise further.

Changes in the Arctic can influence weather globally, and small temperature increases at the poles lead to greater warming of the Earth over time. Today's Arctic sea ice coverage is at its lowest since 1979, and the National Oceanic and Atmospheric Administration anticipates further loss of Arctic sea ice in the next 30 years.

The amount of sea ice affects the salinity of the water and the way ocean water circulates around the world, which over time can cause changes in ecosystems all over the globe, according to NOAA. Melting sea ice creates problems for wildlife too because some animals in the Antarctic rely on melting sea ice for hunting and survival.

Polar sea ice undergoes changes every year. During the winter, the Arctic ice pack grows to the size of the United States. In the summer, half of the ice disappears. In the Arctic, sea ice is about 10 feet (3 meters) thick on average, while ice at the South Pole averages one mile (1.6 kilometers) thick. For most of the year, sea ice is typically covered by snow.

Lily Norton is a contributing writer for Life's Little Mysteries, a sister site to OurAmazingPlanet.